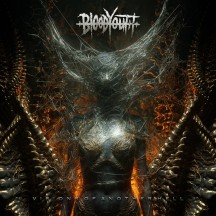 As surprise releases go, Visions From Another Hell is certainly one of the more unexpected ones: a parting gift for fans from the band and now ex-vocalist Tarsus that isn’t just a collection of demos and B-sides to cash in on the hype, but rather a fully formed album of its own surrounding a few prior released singles. As an unfortunate swansong, Visions From Another Hell is one of the more rounded and complete ones to have, closing the chapter on one part of the band’s history while leaving listeners with a compelling cliffhanger to return to in the future.

“Iron Lung” is perhaps the best synthesis of Blood Youth’s sound in one neat package, with its Deftones-meets-hardcore style being as compelling as it is conflicting to hear. While the band play around with the formula, they never deviate from it too far, with tracks like “Something To Numb The Pain” pitting such elements against each other like oil and water in songs of contrasting parts, whereas tracks like “Kept In A Box” somehow integrate them as one unit. If you are not convinced by this sound, then fret not, as the likes of “Body Of Wire”, “Synthetic” and “Human Blur” unleash the band’s hardcore tendencies that hit hard, though at the cost of the band losing their uniqueness somewhat. It is this duality that is the centre of their sound and effectively determines the quality of a track, making you give each track a chance, even if the preceding one was not to your liking.

With Tarsus stepping away from the band owing to mental health issues, he has little holding him back behind the microphone and launches himself into each track as a man who aims squarely between the eyes with his parting shots. “Colony3” sees him come screaming out of the gates before producing a solid clean chorus; it is as unfortunate as it is understandable why he is stepping down, but at least for listeners it provides for an entertaining experience as he gives his all.

Where Visions From Another Hell falters is where the band produce a predominantly nu metal track rather than a hardcore track with nu metal elements; songs like “Open Window” take the worst parts of droning nu metal and put them front and centre, which causes these parts to wilt under the exposure rather than allowing them to thrive. The same can be said of “Dogma”, albeit to a lesser extent, but it in turn goes doesn’t really take the listener anywhere compelling throughout its extended runtime. Listeners may also find the production suffering from the band's disparate influences; while each element separately sounds fine, with the powerful guitars sounding strong and powerful next to the electronic distorted sections, when taken together something just feels off and slightly incoherent as one unit.

Visions Of Another Hell is a solid album when it manages to balance the conflicting styles that lie at its heart, creating a vibrant yet powerful sound that will keep you coming back and hanging on. However, it also highlights the band's shortcomings when this balance is not struck; Blood Youth can hopefully continue perfecting their sound as they move forward without Tarsus.

Written on 05.10.2021 by
omne metallum
Just because I don't care doesn't mean I'm not listening.
More reviews by omne metallum ››