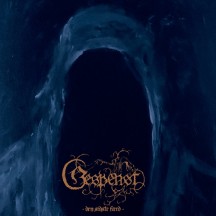 
Do you believe in ghosts? Den Sidste Færd (roughly translated to "The Last Journey") is a five-track ode to the otherworld from Danish folklore. There may be seven levels to Hell, but becoming a ghost is a five-step process and it takes about 30 minutes. Believe me on this one. If you enjoy your blackened death or your straight-out black metal to take its time and doom on once in a while, keep on reading. Yes, it is a niche thing but it does not diminish its importance. Mainstream music is for posers, am I right?

First off, those vocals frighten the heck out of me. Those harsh vocals are full-blown insane cranked to the max distorted full-on blitz master 135% reverb kind of rendition. Actual ghosts must be impressed by it. Then they would not need to poltergeist random objects to get your attention. So in the grand theme of things those vocals do work, but if you are sensitive to harsh vocals, well, this is not going to be for you whatsoever.

The music is pretty much relentless blackened death / black metal with the occasional doom-y riff and tempo-change. The album goes by fast and furious but beckons for repeats despite its overall sameness. The bass guitar is rather prominent for this sort of dark music, which may account for its weird yet unsettling charm. "Dødsfærd" and "Portal" are the main thoroughfare while the other tracks are mostly there to successfully craft atmosphere and mysticism.

Den Sidste Færd is a short album but it emanates a certain transformational magic. Between the theme, the on-point spooky artwork, and the brutal screaming supported by intense music, I am drawn to it again and again. For Danish-speakers out there, there is a certain spiritual kinesis to the word "Gespenst", much like "Geist" has a stronger connection for German-speakers compared to the English "ghost". Perhaps Danes and Germans have a heightened sensitivity about the process of dying, perhaps its purely a language thing. Either way, Den Sidste Færd established that doom metal mixed with blackened death metal can and should be a perfect vehicle for darker themes. Do you believe in Gespenst? Now, I do and I am freaking out you guys.

Written on 07.10.2021 by
Dream Taster
Bringing you reviews of quality music and interesting questions such as: