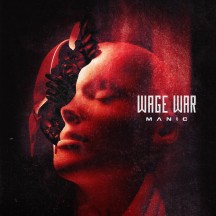 Florida’s Wage War have picked up the metalcore ball and ran with it throughout their career to date, coming to the fore as many of their influences started to shift away from the sound and leave an opening for successors to set their stall. Manic is the band’s fourth effort, and one that sees them expand on their sound while sticking close to their -core sound.

From the opening notes that will evoke Rocky’s theme in your head, “Relapse” builds into the familiar Wage War sound and into a fun metalcore song that will have you banging your head. The band’s run through metalcore tropes with strong use of electronic elements does make for an enjoyable listen and one that would get a room of metalheads moving either in a mosh or nodding along at the back. Tracks like “Godspeed” and “True Colours” may not reinvent the wheel, but they will get you moving whether you want to or not. If you want something fun to listen, then Manic does have tracks that will scratch that itch for you; “Circle The Drain” and “Slow Burn” seem built for those days at a festival where you want a drunken sing-along without having to invest anything more than casual attention.

The band do hint at a progression in their sound though, with the title track being perhaps the most adventurous song the band has done to date, mixing their metalcore sound with trap-esque verses and a deathcore-lite breakdown, picking at the musical buffet and bringing you a plate of food that alternates between being enjoyable and awful in near equal measure. While on their own, each of these elements is decent enough, the band haven’t done enough to integrate them into one new dish to make it palatable to the tastebuds.

The familiar problem remains, however, on Manic, even with their more diverse sound, that being that the band don’t digest their influences so much as regurgitate them. “Death Roll” in particular borrows far too heavily from After The Burial to sound like the band are being influenced rather than just tracing another band’s blueprint wholesale. “Never Said Goodbye” seems to apply this to radio rock wholesale, and creates a ballad that seems like a track an AI bot would produce after it was subjected to Shinedown for hours on end.

Manic does show a way forward for the genre in the wake of its peak years, but it isn’t strong enough to do more than just signpost a route for others. As fun as this album is, it is not much beyond that and it is unlikely to offer something new or unique for those long acquainted with the genre, or offer enough for those who have moved on to other pastures since the heydays of Killswitch Engage or August Burns Red to want to get behind Wage War rather than leave them behind.

Wage War do show signs of promise, but rarely deliver on them in a meaningful way, Manic is ironically unlikely to sway your opinions on the band in either direction, and will leave you tied to whatever you though of the band prior. If you want something inoffensive and easy to listen to, and to get the blood pumping, then you could do worse than Manic.

Written on 13.10.2021 by
omne metallum
Just because I don't care doesn't mean I'm not listening.
More reviews by omne metallum ››