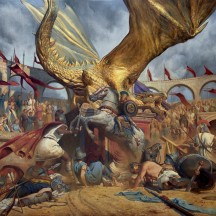 
Hands up: who here expected Trivium to ever release an album this good again back when Silence In The Snow came out?

It’s somewhat mindblowing to me that this is Trivium’s tenth studio album (as they helpfully point out by including an opening instrumental track called “X”); for context, that’s as many studio albums (excluding the Lulu collaboration) as Metallica, the band they were derided in some circles for excessively drawing inspiration from during their early years, have managed to release in 40 years. Maybe it’s just a reflection of my struggles with accepting the passage of time, but Trivium still feel like a young band to me, probably because they made their breakthrough in the 2000s metalcore scene that exploded when I was in my teens. Still, they’ve been very prolific over the past two decades, and have undergone several stylistic shifts across a career that is considered to be uneven in quality. The shadow of 2008’s Shogun has lurked over their subsequent releases, but after reaching a bit of a nadir with Silence Of The Snow, the band have been undergoing a revival, culminating with the release of In The Court Of The Dragon, the first album in the past decade that has been hyped up as arguably an equal of Shogun.

Now, that’s not an equivalence that I would personally make (Ascendancy and Shogun remain the pinnacle of Trivium’s discography for me), but I also don’t think it’s an over-the-top comparison; this is a seriously impressive modern mainstream metal record. The third album with drummer Alex Bent, considered by many (including myself) as a catalyst for Trivium’s resurgence, In The Court Of The Dragon follows the pattern of its two predecessors by opening with the title track, and “In The Court Of The Dragon” has a similar degree of instant memorability to “The Sin And The Sentence”, exchanging some thrashy verses with a chorus that alternates between Shogun-esque groove and emphatic melodic blasting.

This song is one of several that show Trivium looking backwards as well as forwards whilst writing; stylistic comparisons have been drawn with Shogun since the album’s release (notably, “The Phalanx” was apparently initially conceived during the Shogun writing sessions). Additionally, “A Crisis Of Revelation” bears a fairly clear resemblance to the title track of 2005’s Ascendancy in its pre-chorus. The thing that perhaps stands out most here in relation to the past couple of records is the return to the proggier inclinations of their 2000s work; there’s no 12-minute “Shogun”-esque song here, but the likes of "The Phalanx", “The Shadow Of The Abattoir” and “Fall Into Your Hands” do venture past the 7-minute mark with some more expansive writing.

The career-spanning scope of Trivium’s writing partly explains the hype surrounding In The Court Of The Dragon, but throwbacks are nothing but a gimmick if they’re not combined with good writing or performances. On the performance front, Alex Bent is once again a powerhouse behind the kit, managing to straddle the line between providing the flow more mainstream-oriented metal is geared towards whilst also gleefully throwing around fills, blasts and complex rhythms with abandon. The mainstays of Trivium are also on point; some of Matt Heafy’s strongest vocal performances can be found here, with him pushing his clean vocal range to the limit with some higher-register notes on “The Shadow Of The Abattoir”, whilst the guitar work is as strong as one would expect from the band.

As far as the writing goes, it’s strong across the board. Trivium have had a habit of including an iffy chorus or two on past records, but there’s nothing here that made me cringe; in contrast, in addition to the aforementioned title track, there’s a rambunctious force to the chorus of “No Way Back But Through”, whilst the epic descending vocal melody in the chorus of “Fall Into Your Hands” is nicely supported by a frenetic drum pattern beneath. The latter song also has some really potent guitar work during its instrumental sections. Arguably the highlight of the album, however, is that leftover from Shogun; “The Phalanx” has a subtle epic feel to it that is sustained by all elements, with the stirring chorus contrasted with impressive instrumental work that varies between intricate guitar exercises and muscular chugs, all rounded out by a grandstand finale accentuated with strings.

I’ve heard reviews label In The Court Of The Dragon as ‘all killer, no filler’. I’m personally not that taken by “From Dawn To Decadence” or “Feast Of Fire” compared with the rest of the record, but the album is much closer to meriting that tag than one might have expected; mercifully, there’s no throwaway ballad-esque cuts in the vein of “Bleed Into Me” or “Dying In Your Arms” to be found here. I don’t think there’s peaks on this album that rival the strongest songs on their two classic records, which is why I would rank it behind them, but the consistency and quality of this record has been a very pleasant surprise. As many of their contemporaries have faded away in significance, Trivium have persevered and are now arguably in the strongest position they’ve ever been.

Written on 12.10.2021 by
musclassia
Hey chief let's talk why not
More reviews by musclassia ››