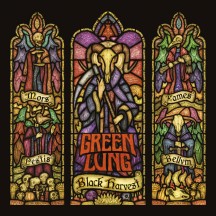 
Reap what you have sown.

Ever since catching Green Lung live earlier in the year, I have been hooked on their folky take on the stoner doom genre courtesy of their Woodland Rites debut, with it providing a fresh breath of green air to enjoy and lose yourself in. Managing to maintain that momentum while evolving their style on the follow-up, Black Harvest will simultaneously catch you mid-step while knocking you off your feet.

Opening with the melancholic incantations of “The Harrowing”, you are slowly pulled along on an album-long journey of riffs and melodies that will have you holding on to your earphones and sanity as the band craft tales and stories that will keep you engaged throughout. Green Lung have managed to distil the perfect mix of doom, stoner, folk, and prog into one cohesive sound that is compelling rather than complex. The band’s decision to increase the classic prog element in their already heady sound makes the mix that much more potent and enjoyable, managing to craft bite sized prog tracks that sound epic, but not overindulgent, with “Reaper’s Scythe” being a solid example. The flourishes of bright and vibrant keyboard tones on tracks like “Leaders Of The Blind” engage you without detracting from the rest of the band (which is a bonus given the guitar solo). Put simply, this level of keyboard input is what Opeth should have aimed for on albums such as Sorceress; an enhancing element that is well-placed here and there.

In contrast to the vibrancy of the keyboard is Cave’s bass, a rumbling darkness that sets a menacing tone behind each track that is the ideal counterpoint to White’s organ; powerful, yet as colourful as the latter, but using a far darker palette with which to craft its parts, with the resulting sounds of “Upon The Altar” seeing this clash bear fruit. All of these elements coalesce on the album’s closing track “Born To A Dying World” which ends the album with an exclamation mark that is as bold as it is brash. While Green Lung overwhelmingly do more right than wrong throughout the record, there are elements that could be tweaked slightly, though it is more perfecting the garnish to what is an otherwise brilliant dish. Templar’s vocal parts do tend to blur into one another, there being too little variation and a constant use of effects on his vocals; it fits the tone of the album but does feel somewhat homogeneous on repeated lessons. Given that there is plenty else to hear, it is only really a gripe, and barely a scratch on the surface.

Though I was late to the party with Green Lung, I am glad that the party is still in full swing and about to take on a second life with Black Harvest; it is well worth checking out and will likely make fans of those who give it the time of day.

Written on 16.10.2021 by
omne metallum
Just because I don't care doesn't mean I'm not listening.
More reviews by omne metallum ››