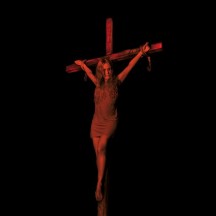 
Learn your maths with Lucifer.

As sure as III follows II, IV follows III. Lucifer have spent much of the last decade teaching metalheads how to count, while also providing them solid albums of retro-faux Satanic rock. With the band now settled into a groove, IV produces fresh cuts of new material for listeners to add to their growing collection of solid, if unspectacular, rock.

Fans of Lucifer will feel immediately acquainted with the album, as it feels like a fresh coat of paint on an old design. Tracks like the cleverly titled “Wild Hearses” and “Cold As A Tombstone” pick up where the band last left off with their bluesy, classic rock vibes recounting tales of witches and Satanic spiels. Four albums going strong, and Lucifer can be counted on for producing solid albums that will have you digging the band’s retro rock as you nod along to these Satanic tomes.

Sadonis once again hits that niche between temptress and narrator perfectly, singing you the song while also conjuring mental images for you to ponder as the song plays out before you. “Crucifix (I Burn For You)” is a solid example of what makes the band enjoyable, as Sadonis is able to find a niche between the soulfulness of tale twisting à la Phil Lynott while recounting stories that have more in common with King Diamond. IV’s production nails that warm analogue feeling that all retro rock bands aim for, sounding so old school that it feels sepia-toned. It fits the tone of the album perfectly and allows songs like “Louise” to benefit from a well-rounded sound without sacrificing atmosphere. The guitars and bass sound like they could have been ripped straight from a Humble Pie record, while the drums are vibrant enough to push the tracks forward and don’t suffer the problem with many older bands having dull, thudding drum sounds.

The problem IV faces is that it sounds like more of the same as the band’s three preceding records; while being formulaic isn’t necessarily a bad thing (Motörhead made a career out of it), it is when the band aren’t able to improve on themselves with each record or tinker enough at the edges to make slight changes so that familiarity doesn’t start to feel stale, which is the case here. As enjoyable as the tracks are here, none of them are any better than what they have done before, nor are they identifiable enough to stick out if the band’s discography was put into one playlist. Going forward, you hope for the band to take a page out of Ghost’s book and try mixing up the formula to perfect the sound they have, rather than merely replaying it. Similarly, as good as the album is, none of the songs stand out and grab you by the scruff of the neck in the way to make the band impose themselves on new or casual listeners. While IV has a consistent level of good quality, it has no peaks in quality to which you could recommend your friends as their strongest material; while credit must be given to the band for having no valleys, an album that is a straight line from beginning to end ultimately isn’t too memorable.

IV is a solid album and one that continues the band's streak as a good retro rock outfit. While the band aren’t showing much sign of progression, it is really down to you as a listener if you want more of the same or are starting to wear on it a little and hope for the band to start to experiment here and there to make future records more exciting. With that said, if you want a straight, down-the-middle, fun record then Lucifer have your back.

Written on 21.10.2021 by
omne metallum
Just because I don't care doesn't mean I'm not listening.
More reviews by omne metallum ››