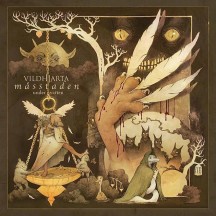 
An 80-minute djent album: who thought that was a sensible idea?

The subgenre that has come to be known as djent, more often than not, involves a fusion of the core sound referred to as djent (complex, polyrhythmic riffs played with a crunchy downtuned tone taken from Meshuggah) with an established style, whether it be metalcore (Periphery, Monuments), deathcore (Veil Of Maya, Within The Ruins) or more classic prog metal (TesseracT). On top of all of that, you have Vildhjarta, whose style is somewhat jokingly referred to as ‘thall’, but which to me sounds like the closest thing there is to a ‘pure’ djent style; there’s parts that lean towards deathcore, and there is occasional use of clean vocals, but for the most part, Vildhjarta focus almost entirely on the tonal and rhythmic aspect of djent.

Now, that’s an intriguing premise, and the Swedish outfit have the chops to back that approach up. However, with a relative lack of hooks or variety in tempo, it’s an approach that is best suited for small portions, so when I saw that Måsstaden Under Vatten was a 17-song, 80-minute record, I struggled to envisage how it could remain engaging throughout that intimidating runtime. As it turns out, it doesn’t, at least not to me. Måsstaden Under Vatten is an album that starts off exciting, but becomes gruelling long before reaching the 10-minute closer, “Paaradiso”; I know it’s been 10 years since their first album, but with something like this, I feel like two 40-minute albums released a year or two apart would work so much better than one gargantuan effort.

Once you look past the runtime, what do you get on Måsstaden Under Vatten? Well, you get rhythmically complex djent riffs and breakdowns, and you get an awful lot of them. One thing that Vildhjarta have going for them is that their sound is produced well enough to give these riffs maximum weight, so the band bludgeon listeners throughout Måsstaden Under Vatten. The other major property of Måsstaden Under Vatten is the regular use of eerie, clean atmospheric tones across most of the album’s songs, acting as a contrast during the intense riffing and a palette cleanser between these heavier sections.

The problem is, I feel like I’ve nearly described the entire album in the last paragraph. It’s an approach that works well, but it’s not one that really lends itself to inter-song memorability without additional properties. There’s little sections that grab your attention, whether it be the convoluted lead guitar freakouts on “Sunset Sunrise” or the blast beat/clean singing combo in following track “Sunset Sunrise Sunset Sunrise”, and the relatively uplifting tone of opening track “Lavender Haze” does differentiate it from much of the rest of the tracklist. However, unless you’re giving Måsstaden Under Vatten an particularly intensive listen, a lot of these details become buried within the enormity of the album. The song that stands out the most in terms of incorporating range is that aforementioned closer “Paaradiso”, whose 10-minute runtime gives it opportunity to shift into fast-tempo blasting and incorporate some effective atmospheric guitar leads.

Ultimately, Måsstaden Under Vatten is a good second album from this somewhat cult Swedish band, and existing fans of Vildhjarta should be thrilled to receive such a bumper edition of music from them, given the huge wait preceding its release. For everyone else, however, I can’t help but feel like the album will come across as too long and insufficiently varied, particularly considering the style, for it to be appreciated as more than just a decent display of aggressive rhythmic proficiency. Given how well Humanity's Last Breath (who feature two members of Vildhjarta) have pushed the boundaries of their brand of deathcore on this year’s Välde, I can’t help but find Måsstaden Under Vatten to be slightly underwhelming.

Written on 17.10.2021 by
musclassia
Hey chief let's talk why not
More reviews by musclassia ››