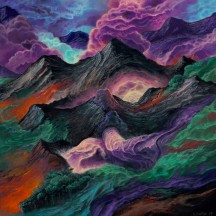 
It isn't necessarily "atmosphere" that makes or breaks atmospheric black metal. It's emotion.

Hold it right there, Carly Rae Jepsen! You mean to tell me that an album's emotional impact is somehow more important that the atmosphere it evokes in a genre that literally has "atmosphere" in the name? There's emotional hardcore and atmospheric black metal. There's clearly a distinction of priorities. But here I raise you a question. What's the difference? I wish I could raise you an atmospheric black metal album with no atmosphere and a lot of emotion, and one that's completely the other way around. Instead I'm going to ask you, imagine you stumble across an album. It has an artwork with nature. Trees and stuff. You read "atmospheric black metal". If some part of you cringes and wants to move on, is it because you've listened to a bunch of similar sounding stuff that lacks atmosphere, or a bunch of similar sounding stuff that lacks emotion?

Or how about this. We remember Agalloch fondly. Is it because their music sounded like a snowy Cascadian forest, or because it "felt" like a snowy Cascadian forest? Feelings, bruh! I'm not saying that atmospheric black metal should tackle depression, joy, lethargy, powerlessness, rage, mundaneness, whatever. They can, but that's not mandatory. By the time an album is done, I should have felt something. And if my interest in atmospheric black metal has waned since Agalloch's breakup, it isn't just that nothing will ever compare to them, nor that any genre is bound to stagnate with every band saturating it, but also because that one sweet spot where it isn't just atmosphere is hard to hit. Do Noltem hit it? Well, I don't see any trees on that cover art.

Don't be fooled by this being a debut album. Noltem have been around for a while. Without looking it up, it should be pretty hard to guess, but I'll give you a hint: their demo was released before Ashes Against The Grain. Everything that has been leading up to Illusions In The Wake feels like a genre's entire lifetime. A wine in a basement, slowly catching the taste of all of the genre's distilled qualities. Elegant acoustic interludes, progressive arrangements, tremolo picking, black metal that's simultaneously harsh and melodic, gorgeously layered melodies. Sure, all these things create a sense of atmosphere, but just like the surrealist colors of the mountains in the artwork, it's not really that which really wins me over. It's how all those years have made Noltem erupt unto the scene with hoarded maturity. And the kind of understanding of the sound's strengths that can only be gained by someone who lived through it.

It's no wonder that this album features guest contributions from members of Falls Of Rauros and Nechochwen. If they believe in Noltem, so do I.

Written on 27.10.2021 by
RaduP
Doesn't matter that much to me if you agree with me, as long as you checked the album out.
More reviews by RaduP ››