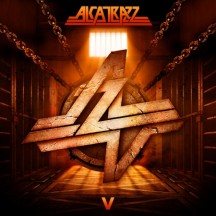 
Disclaimer: This is a version of Alcatrazz without Graham Bonnet. It sounds surrealistic, I know.

I am not going to get at all into the dispute for the name of Alcatrazz. Graham Bonnet himself offered a very mature response back in December 2020. He said: “I have no plans to relinquish the name Alcatrazz and I expect that they don't either. This is an old story, bands break up and there becomes two versions. I'm not bothered by it. I've toured with Doogie the past few years with Michael Schenker Fest and he is a good friend and a damn fine performer. In my opinion, there is no such thing as too much music. People can listen to one or the other or both versions and choose whatever they like. I'm not interested in squabbling over a name, I'd rather just make music”.

Nice. And I’d rather just listen to music and sometimes review it instead of following any kind of drama. So let’s get on with the review.

Many people think that playing good heavy metal is easy. Well, it is not. Heavy metal needs great musicians and superb songwriting in order to stand out and this has always been the case. There is a reason why Judas Priest and Iron Maiden are who they are, and thousands of other bands in the genre have been trying to break big for more than four decades now but have remained unknown. Heavy metal needs glorious and flashy guitar playing, a hard-hitting rhythm section and, more importantly, a powerful and unique voice that manages to come out on top of all that. Alcatrazz have really good musicians in their ranks and the voice of Doogie White sounds amazing even now when he's in his early sixties. The songwriting is also good. At times, it is even great, but mostly it is good enough.

V is distinctly heavier than the material Alcatrazz put out in the ‘80s. This is no surprise though; Born Innocent was already a move towards more metallic sounds than the ones we were used to hear from them in their early years. On this album, “Guardian Angel” and “Nightwatch” make for a speedy, energetic, and catchy one-two, made of heavy metal thunder that even touches on power metal, and we all know that a job well begun is a job half done. There is some relative variety displayed on the album with the presence of the folk and epic “Blackheart”, the darker and doomier “Return To Nevermore” and “Maybe Tomorrow”, and with the hard-rocking “Sword Of Deliverance” and “House Of Lies”. I also absolutely love the ballad “Dark Day For My Soul” that closes the album.

All in all, V is quite entertaining without doing anything extraordinary; it just does enough things right. That said, and despite the many positives, there is some filler material present, which is to be expected; there is no way a band can pull off two albums in 15 months featuring approximately an hour's worth of music on each one, without having some lesser tracks included and without some of those dragging more than they should. V’s second half is less exciting than the first, and this shows a bit more because the album is too long anyway.

As far as individual performances go, Joe Stump is a guitar hero and a worthy successor of Yngwie Malmsteen and Steve Vai in the band, obviously nodding at the former; there is some serious shredding taking place here (check out the solo of “Maybe Tomorrow”

). Doogie White is an outstanding vocalist, his voice is a mix of Ronnie James Dio and Biff Byford (the fantastic “Grace Of God” proves my point) and, although it does feel odd to listen to Alcatrazz without Bonnet, I personally very much prefer White’s voice at this point in time. The keyboards of Jimmy Waldo are adding nice touches, sometimes in the form of ‘80s pompous fills and other times as ‘70s rock ornaments.

The guest appearances from Saxon’s Nigel Glockler (drums on “Guardian Angel” and “Blackheart”), Tank’s Cliff Evans (bass on “Grace Of God”), and Donnie Van Stavern of Riot (bass on “Guardian Angel”, “Nightwatch,” and “Target”) are more than welcome. They help this already strong version of Alcatrazz sound even stronger. As a result, V is a competent heavy metal album and, compared to its predecessor, a better release overall. In fact, I’d go as far to say that V is the best Alcatrazz album since No Parole From Rock 'N' Roll. But be prepared; it sounds quite a bit different than the band’s famous debut.