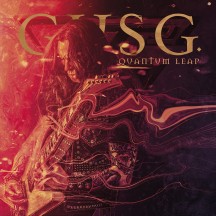 
Skilful, but also a little uneventful.

I like this one. Let’s be clear about that right from the start. Just like with Smith/Kotzen, Gus G. brings us another record that is very much focused on guitars. Not really that surprising for the people that have listened to some previous records or have heard the shredding on the Firewind albums. Another thing I can say straight away, is that Quantum Leap delivers excellent shred work in spades. Gus G.’s talent as a guitarist is on full display here.

Let’s talk a little about the production. “A little” is not an exaggeration. It’s put together well, and there’s not a lot to talk about here… or is there? Everything sounds well-balanced and produced, with the aforementioned guitars taking the centre stage. The way they make that happen though is not always something I like. It’s pretty common with these types of records to either have relatively basic arrangements for the other instruments, or the mix pushes them into the background. Given that in this paragraph, we are talking about the production, I think you already know which of the two happened here. While I wish the other instruments were more present at times, I still prefer this over more basic arrangements, to be honest.

From a technical skill level, Quantum Leap is without a doubt very impressive. However, is it engaging? Yes… and no… I’ll get to the point. It’s overall a pleasant listen, but I don’t think it has a lot of staying power. Certain songs (like the title track) have a bit too much repetition for my taste. It’s something that started to get more and more noticeable with subsequent listens. What I do appreciate about Quantum Leap is that we get some nice arrangements in the drum department. There’s some actual flair and style added to this record by the “supporting” instruments, and that does give this piece of work a bit of extra depth.

That being said, I can’t stress enough that this album is still a good experience overall. There are some great melodies and riff-work, and the pace and flow are overall rock-solid. This album takes you on a journey without too many surprises. It never really runs out of steam, but at the same time I feel like it could have been running on even more cylinders.

All in all, Quantum Leap delivers on its promises. It’s a guitar record through and through, with some very sweet compositions and an overall good flow to it. And while it’s not necessarily a record that’s “infinitely” re-listenable, it’s very much worth giving it at least one or two. Especially if you like listening to a record with a high emphasis on guitars and technical prowess.