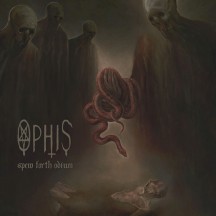 
"No light, no destination, no compromise!"

That's the message on Ophis' Bandcamp page, along with "Raw, old school nihilistic Death/Doom Metal." and "Established 2001". So this should tell you pretty much all you need to know. Ophis have been around for a while, and their brand of death doom is pretty old school and dark. Simple as. I'll also tell you Ophis like to take things slow. Both in terms of the pace of their music (it's doom metal after all), and in the time spent between releases, as this is barely their 5th album in more than two decades. And them being that old school and all, you can pretty much expect Spew Forth Odium to sound like something they could've released at any point in their career.

There are a few things that still make me want to talk about Ophis despite how apparently straight-forward the album is. First, there's been some lineup changes since the last album, 2017's The Dismal Circle, but it's not like they didn't also go to a guitarist/drummer change back in 2016. With the core of Kruppa and Kröplin (also of Funeral Fvck) intact, with Sufferage and Todtgelichter members joining in the ranks. Second, Jens Ballaschke, who produced the band's magnum opus, 2010's Withered Shades, is producing again. And third... death doom albums going into hour-long runtime are hard to get right.

What I'm reminded most of is Officium Triste, a band that is in similar death doom waters and that Ophis have released a split with. I was pretty indifferent to their stuff up until they released The Death Of Gaia, but that one just hit the right emotional balance to resonate with me. Instead Ophis have managed to consistently hit that sweet spot, even if they don't really reach that album. But Spew Forth Odium feels less dense that the band's early work. Like a knob has been twisted more towards the pensive side, but only barely so. The album's doom still goes heavily into funeral doom territories, and creating heavy atmospheres through bits of death and black infusions.

This seems like a direction that 2017's The Dismal Circle was already going in, but Spew Forth Odium finds better ways to integrate the pensive darkness and the crushing atmospheres. The production job helps this feel gritty in the right way. So it does work upon Ophis' strengths, but I can't help but feel like their uncompromising old-school ethos is making their music run in circles. It's old school death doom as great as old school death doom can be, and when it hits, it hits, but there's the occasional moment where I'm just begging for some more dynamics. Like for the love of God give me something other that pensive melodies and growls once in a while. I shouldn't have to wait until the end of the record for that.

Ophis had mutated the death doom sound to their liking to create their own sound. And I respect that a lot. It's enough that I can tell them apart from Saturnus and Swallow The Sun and Mourning Beloveth. And it's in the genre's DNA to be long, slow and uneventful. At least their take on it is interesting enough that the criticism isn't specific to them. The album ends on a very high note, so that has deceived me at least once that I should give it another listen.

Written on 05.11.2021 by
RaduP
Doesn't matter that much to me if you agree with me, as long as you checked the album out.
More reviews by RaduP ››