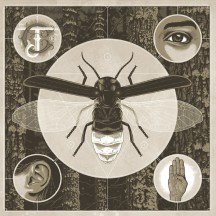 
The last time there was a Jerry Cantrell album, Alice In Chains hadn't even reunited.

As far as grunge bands go, Alice In Chains is pretty universally beloved. I don't wanna go into rankings or trying to figure out which of the big four actually had a bigger impact on music, and even as far as metal is concerned, we also feature Soundgarden, and Thou did both Nirvana and Pearl Jam covers. But within Alice In Chains a lot of attention is rightfully given to Layne Staley, partly because of how amazing of a frontman he was and partly because of his tragic life. So listening to Jerry Cantrell's solo stuff it becomes a bit clearer just how much of Alice In Chains's sound is owed to Jerry. Not like that wasn't already obvious once the band was resurrected in 2005, but there's a bit of a difference.

Jerry's vocals are enough to immediately bring "Alice In Chains" in my mind. Which isn't something you'd expect from someone who wasn't the lead singer during the band's glory days. His role shifted from backing vocals to occasional (co-)lead on songs like "Would?" and "Grind", but even so they did feel like a continuous presence. And that only increased once the reunion happened and he shared lead vocal duties with William DuVall. Perhaps I feel somewhat of an affinity for the post-reunion material and that's why Cantrell's vocals immediately and subconsciously bring the band to mind. Like I listen to some of the songs here and if I'm not particularly paying attention my mind tells me that this is an Alice In Chains song. Presumably a post-reunion one. But there's one thing missing.

If there's one thing I absolutely love about Alice In Chains pre or post the hiatus, it's the vocal harmonies. And even though I said that they're missing, it's more like they're done in a way where it doesn't feel like a duty shared. I'm not sure if there's any backing vocals actually recorded by Jerry himself, but even if someone like Greg Puciato is credited with some of the backing vocals here, it's Jerry's voice always at the forefront. This is not a criticism. It's his solo album, of course his voice is at the forefront. And even if a lot of the music sounds like something that could be on a Alice In Chains record (the first two tracks especially), there's a different type of quality control for material that isn't part of a band but a solo record, and some of the cuts here I would never see as a Alice In Chains song. Both because of their quality and because it's quite clear that they're here because Cantrell isn't just writing music to fit his main band.

Well, Brighten has a pretty strong country rock vibe, which unintentionally makes me think that Jerry is getting old. The rocker who goes country at a certain age is a pretty established trope at this point, and as someone who isn't American nor has a particularly strong affinity for country music, I'm a bit out of my element here. I'm more used to country music being used as a pun rather than as legitimate music, and I'm sure that says more about me and my lack of genre exploration than it does about Brighten, but it does leave me very conflicted about the album. It's like some cover band couldn't decide if they wanted to do CCR or Alice In Chains covers, except the cover band is actually pretty convincing at that blend, and the cover band is actually Jerry Cantrell.

Going back and listening to it, even the songs I initially heard as something that could be mistaken for an Alice In Chains song have a certain twang to it. But it's something that works pretty interestingly, like a little twist on the established sound. But then it goes into a more laidback mood and it kinda loses me. So Brighten is like two great songs, two eh songs, two great songs, two eh songs, and then an Elton John cover that feels pretty unnecessary. Hence comes the conflict. Brighten has some really good material, some that I like more than stuff on Degradation Trip and Boggy Depot, and it's also much shorter than those albums whose runtime stretched over the hour-mark. But the duds... hey, maybe it's my fault for not liking country.

Written on 06.11.2021 by
RaduP
Doesn't matter that much to me if you agree with me, as long as you checked the album out.
More reviews by RaduP ››