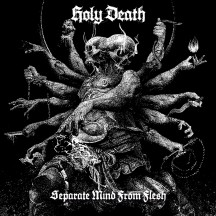 
I love you, Holy Death, I really do. But those interludes... just drop them.

There are very little of my Clandestine Cuts babies that I was more excited for than Holy Death. Ever since I first heard Supreme Metaphysical Violence, I was eager to see how much more pummeling can the band get. Then Deus Mortis came about and it was, indeed, also pummeling. And for a band that has made four EPs in less than two years, it isn't that surprising that they upped the ante a bit and got around to making a full length album. But I'm still cautious.

Separate Mind From Flesh still doesn't really feel like an album, at least to me. Some of it is the runtime, since, at 28 minutes, it's only five minutes longer than their debut EP, MMXIX. And also the intro and some other interludes add nothing to the album. Though they're far from the worst offender in that regard and they keep things pretty brief, they sound tacky and they break the immersion that big loud riffs would otherwise provide. So if you cut those down too, Separate Mind From Flesh feels pretty in line with their previous EPs only slightly longer.

Now for some of you who haven't heard Holy Death before, the gist of it is this. It's death doom, but it's not the sad goth king. It's more sludgy, and by more sludgy I mean that it sounds like beatdown hardcore if its pace was halved. The hardcore is most clearly felt in the vocals, with the riffs often being pure amp worship, with the occasional detour into more pensive melodies. Those detours seem a bit more frequent here, with probably goes to show that Holy Death are trying to shake up the usual formula just a bit for their step up to full length, but it doesn't really make me feel like some of it is filler to make an EP into an LP.

So I think I wouldn't be that overly critical about its simplicity and its filler if it was an EP that I covered for the Clandestine Cuts. A lot of what I loved about their sound is still here. So yes, Separate Mind From Flesh is pummeling. But if you wanna step up, that's another league. That's no longer fighting for attention with some other bedroom projects. That's fighting for attention with established and legendary acts. So step up. I wouldn't even bother if I didn't think that there was some potential for it.

Written on 08.11.2021 by
RaduP
Doesn't matter that much to me if you agree with me, as long as you checked the album out.
More reviews by RaduP ››