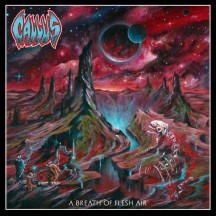 A Breath Of Flesh Air is the second album from Preston-based Callus, albeit one that runs on the shorter side at a shade over 30 minutes. As the above description indicates, this is above all other elements arguably a stoner metal album, but it’s of a hefty, dirty and outright mean kind. The sludgy tone, gruff vocals (that vary from a nasally shout to a booming roar courtesy of the dual vocalists) and fiery atmosphere on opener “Molar Crown” bring a real malevolence to the fore, even when the song slips into more driven desert rock-inspired grooves.

This song in particular is one where the lines between stoner and sludge blur and veer towards the latter; arguably, this is where Callus shine most brightly on A Breath Of Flesh Air, as that mixture of weight, venom and energy offers all sorts of opportunities for making a heavy impact on listeners, which is backed up by hefty riffs and neat marching drum rolls. It’s also a song that has the room to explore such opportunities, as only one of two on the record that exceed four minutes. “Ka-Tet”, without covering quite so much ground, does balance the desert rock grooves (which also get some nice clean vocals to accompany them this time around) and Southern-style guitar leads with some more ominous and malicious sections.

Now, I mentioned thrash in the intro, so how does that come into play? Well, it would be misleading to say that anything here is fully thrash; however, “Cinderstella” has a fast, punky energy and pounding drums that draw some thrash vibes into the equation, with the rapid-fire vocal delivery matching that energy. It does mostly come down to this song, which gives it a slight ‘odd one out’ vibe; it’s something that would be worth exploring more on an album with a greater runtime, but does feel a tad undercooked here.

I’d say that the area that Callus generally has the most room to grow in is ensuring a more cohesive vibe, based on the evidence found on A Breath Of Flesh Air. There’s some quality riffs and other moments to be found here, but not everything quite goes together as well as it could. This is perhaps most encapsulated by “Fatberg”; already notable purely from being a 10-minute mammoth on an album otherwise populated with bitesize cuts, it kicks off with a somewhat awkward stoner rock verses that raises some concerns about how these 10 minutes will play out. The problematic section in question is subsequently countered by some more satisfying stoner/sludge riffs, which eventually lead into the doomiest section of the record for a rather eerie, hefty midsection that works really nicely. Unfortunately, that same opening riff comes back right out of nowhere immediately after a really strong guitar solo to throw you off again.

Trimming some of these less convincing moments and ensuring that longer songs flow more naturally could raise Callus’s next album from ‘good’ to something rather exciting. Still, I found quite a bit to enjoy on A Breath Of Flesh Air across its limited runtime, and feel that the band’s fusion of different metal styles brings out some strong ideas that are delivered with power, groove and energy, so I’m looking forward to seeing where they go to next.

Written on 09.11.2021 by
musclassia
Hey chief let's talk why not
More reviews by musclassia ››