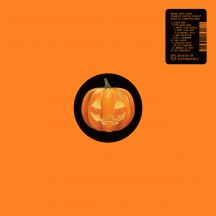 After that underwhelming presentation at the theater, and having to answer repeated questions about my plans for the upcoming holiday, I took the easy way out of my malaise and pulled the classic move of watching Halloween on Halloween (the 1978 original, of course). It’s a fantastic slice of celluloid essential to horror history, and its creeping terror rests in no small part on its revolutionary and memorable score. The score, a series of menacing, spine-tingling synth pieces composed and performed by director John Carpenter, has since become one of the best-known collections of music associated with the horror genre (particularly the iconic main theme); the chilling cues and haunting drones mesh perfectly with the elegantly evil images and go a long way in driving every scare deep into the bones. Carpenter’s original version of the score is well worth experiencing as an album all its own, and he has others besides that you should check out if you like dark electronic music – he might, in fact, be the most successful director-turned-musical artist out there (although obviously David Lynch’s stuff is good, and when we finally get a full-fledged album out of Naoko Yamada, there will be no further competition).

That legendary Halloween score finds itself reimagined here, adulterated into something spacier and even more unorthodox by the mercurial erstwhile metallists Ulver. I’m much more of a Carpenter fan than I am an Ulver fan, but I have enjoyed their last few forays into psychedelic synthpop, and this project is an exciting mesh of moods. Some of the darkness of the original compositions is preserved in tracks like “Club Fuego,” “RIP Brouhaha,” “Aleen Howl,” and “Atelier’s Hume”; though this Halloween has now passed us by, we’re still locked in the moribund march of autumn, and the bracing cold of urgent orchestration is a perfect soundtrack to falling leaves and whispering winds. No longer functioning as mere backdrop to a visual story, the tracks have been built up, layered, and rearranged with new shades of soft mystique and scintillating dynamics; Ulver frequently abstract the original tone into a hazy drone or herd it into a hauntingly romantic shuffle. Some tracks, like “Addi Fled Hon,” even escape the outright morbidity of Halloween and alight on something trippier and fuzzier, more suited to something like The Color Out Of Space or Mandy. I’m not familiar enough with Ulver to render much insight into this little experiment’s place in their discography, but it feels like something halfway between their recent studio albums and a novel side project born of amusement – not to downplay its musical worth, but rather to suggest that it feels kind of “fun” in a way I don’t usually associate with Ulver. Just look at that cover.

“Scary Muzak” is an appropriate descriptor for these creepy mood pieces. I hope that the producers of this new Halloween trilogy are paying attention, because if Halloween Kills was any indication, they’re going to need something pretty snappy to make Halloween Ends worth my time – and I’ve got just the album in mind for it.