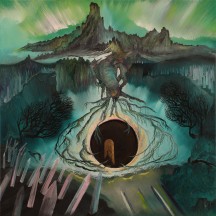 
Is it extreme experi-metal? Blackened prog-doom? Gothic post-death? Yes, and/or no, to each one. Kayo Dot crank up both amps and accessibility, and call it “avant-garde doom”, while their music stands up with pants down, mooning categories conventional and convoluted alike.

Moss Grew On The Swords And Plowshares Alike starts out with a solid, mid-paced synth riff in “?/?!”-time, and then switches it around to the point I’m getting desperate enough for my mind’s eye to picture “11” in the denominator. As far as I knew, non-dyadic bar lengths would make no sense at all, but it turns out to be called “irrational meters”. Proves me half-right, I guess, but mostly suggests I’d better change topic fast as a fractional blast beat (whatever that is). Since starting to toss word salads around here earlier this year, I’ve been conditioned by RaduP filling my face with all manner of loopy stuff steeped in the peculiar subset of metal tagged as “avant-garde”. The sort that farts in the general direction of deorbited “progressive” music keelhauled under the outside of the box and probes the gassy trajectories of ideas recycled through its walls for load-bearing timber logs to sic the beavers on.

In other words, progressive says “What box?”, rejects paradigms, seeking to construct in a vacuum, while avant-garde says “That box!”, critiques paradigms, seeking to deconstruct into vacuum. Richard Wagner, free jazz, post-punk, and krautrock are or have been examples of avant-garde music, at least in the original meaning of the term. These days, it’s as likely implying a filing cabinet for edgy reactionism as a shelf labelled “miscellany, etc.” full of lawnmowers, used shoelaces, a banana, and similar items. To find out which piece of furniture sole member (apart from guitar solos and lyrics) Toby Driver throws beavers at, I could embed any Maudlin Of The Well song and call it a day. A more interesting exhibit, however: Kayo Dot’s debut album, Choirs Of The Eye was a reaction to a series of internet discussions (with some Opeth fans on some metal forum) about composition. Toby Driver decided to write an album without repetition, predictable sections, or traditional riffs, and so he did. To quote Roger Waters from that song on Pink Floyd’s Ummagumma that’s got “Furry” in its title, “Well, that was pretty avant-garde now, wasn’t it?”

Unlike much of their discography, Moss Grew On The Swords And Plowshares Alike is metal through-and-through. The sheer amount of various ingredients needing to get along here seemingly necessitate a mix that ends up a tad too thin to let the distortion through, which makes it a bit strange to see it labelled “doom metal”. There’s as much (if not more of each) death metal, post-rock, and symphonic prog on it as there is anything resembling doom, but it should already be clear that genres are of little use here. I wasn’t sure what to think about the first pair of songs, and still have reservations about their place in the track list. The first 8 minutes consist of a rhythmic Isis-like ebb-and-flow, accented by vocals mixing tenor cleans with echoing death growls. Though it detours through odd-rhythm riffs (look, mom, I didn’t mention King Crimson even once… ah, crap!) and percussive variations, I remember barely anything from “The Knight Errant” except for the middle of the song. There, a synth solo impossibly fits into the ungraspable rhythm and glues everything together. At that moment, I “get” it, but the glue soon wanders off, and a vocal display that comes off as trying to fit too much into the lines puts a not-the-good-kind-of erratic touch to the rest of the song. “Brethren Of The Cross” is a progressive death/doom number with a lot of impressive moments, such as the subtle hook syncope in the main riff’s final beats and the violent growls. As a whole, and placed such as it is, however, it mostly settles the album dynamic into a mid-pace groove continued from the opener, and gets repetitive too quick.

Luckily, the beautiful 70s prog throwback epic that is “Void In Virgo (The Nature Of Sacrifice)” soon comes along to save the day. Paradoxically, as the least metal song on an album made more accessible and memorable by the larger focus on metal, it is one of the most memorable cuts on here. A neat Yes vibe runs through its melodic verses and slightly unpredictable guitar solos as we follow a woman’s journey through forests and up a mountain where she decides to drop dead to a sickly-sweet, excellent anthem of a chorus. It's colourful and fuzzy like a bumblebee in flight; no need to re-listen, it’ll be stuck in your brain already. Two more songs displaying some very impressive drum work and a slightly try-hardy attempt to write Very Extreme Metal™, respectively, follow. Then, the contrast between airy atmospheric ambiance, restless drums, and oppressive blackened screams in “The Necklace” seals the deal for me: this album’s a keeper. The prog death movements intertwining back and forth throughout the closing track before the album collapses into a 5-minute long terrific drone soundscape is just icing on the cake.

A slightly frustrating listen depending on mood, perhaps, as there are as many parts that simply work as parts that sort of don’t. However, when Moss Grew On The Swords And Plowshares Alike simply works, it is indisputably exquisite music, and when it sort of doesn’t, it is still very decent music. Now, it’s probably a waste of fingers crossed to hope Kayo Dot doesn’t go for something entirely different next time, right?