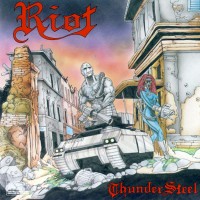 
ThunderSteel is often described as Riot's best album, which to me comes as no surprise. Admittedly, Riot were a late discovery for me, after years of listening to the mighty Iron Maiden, and Judas Priest, but I'm glad I eventually did, and in particular ThunderSteel.

ThunderSteel is a remarkable album, full to the brim with crowd-pleasing stadium anthems containing such addictive chourus and super strong riff melodies played at lightning speed tempos, with the tempo being within speed metal territory, right up there with Painkiller.

Another thing that makes this album sound so terrific is Tony Moore's vocals; they have a real sense of power and energy to them that will likely have you nodding your head and singing along, especially to that classic "Thundersteel" chorus. Although Moore's vocals are excellent, for me they are not quite on the same level as Rob Halford's vocals for Judas Priest, but they certainly aren't far behind, especially when it comes to those high-pitched squeals. The vocals and lyrics clearly have the US power metal feel, which is understandably why many consider this to be US power metal rather than just heavy metal.

Some songs really stuck with me, in particular "Bloodstreets", with its slow ballad-like build-up, great vocal performance, impressive lyrics, and memorable riff; other songs that stood out are "Sign Of The Crimson Storm", "Fight Or Fall", and of course the classic title track "Thundersteel", one of the catchiest, and most enjoyable songs in heavy metal. Also, let's not forget that final track, the epic closer for such a great album.

Vocalist Tony Moore was certainly a remarkable addition to ThunderSteel, having been Riot's third vocalist, but guitarist and songwriter Mark Reale also puts on an impressive display of guitarwork with some very impressive solos, showing just how underrated of a guitarist he truly is.

Well ThunderSteel is undoubtedly a brilliant album; it has enough quality moments for any classic heavy metal fan to appreciate, such as myself. I would say it's certainly good enough to give some of W.A.S.P.'s, Judas Priest's, and even Iron Maiden's top albums a good run for their money.