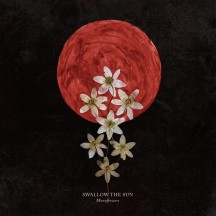 Doom metal is pretty sad. Not sure if you noticed. But usually that is a very ambiguous type of melancholy, one that the listener can use as a mirror for whatever melancholy they're feeling. Swallow The Sun's music was never sunshine and rainbows, but one death still leaves such strong a mark that it's hard to imagine anything on Moonflowers being about anything else. When Aleah Starbridge, the life partner and Trees Of Eternity bandmate of Juha Raivio, died, it became clear that a lot of effort came from Juha to channel that grief. And, in a strange way, more music from or for Aleah came after her death than before it: the Trees Of Eternity debut album, the newly formed Hallatar, her own Aleah project, and also Swallow The Sun's When A Shadow Is Forced Into The Light. Now there's a new Swallow The Sun.

The thing is, When A Shadow Is Forced Into The Light took its title from a Trees Of Eternity song, and was clearly dedicated to Aleah's memory. It's obvious that that grief still permeates Moonflowers, but I feel it would be pretty soulless and voyeuristic to try and dissect how much Moonflowers was inspired by Aleah's death, how much by the lockdown, and how much by whatever inspired the band's songwriting before the two. Will every review of Swallow The Sun's albums henceforth have to mention Aleah's death? One could binge the entire Swallow The Sun discography, and they wouldn't notice that something happened to fundamentally alter the band's sound. It's melancholic, gothic and melodic death doom.

Well, what does feel a bit different is that Moonflowers feels closer to gothic doom than death doom, because of how the harsher moments are more sparingly used. Songs like "The Void" have a pretty goth rock feel to them, at least a chuck of it injected in their usual doom sound. "All Hallows Grieve" is a duet with Oceans Of Slumber's Cammie Gilbert that works really well. There are obviously some harsher moments, but by far the most impactful is the blackened ending of the closer, "This House Has No Home". But as a whole, it's probably not that far off from the melancholy of the usual Swallow The Sun sound, just with more grief and ennui this time around.

I've been more of an appreciator of Swallow The Sun's music rather than a dedicated fan, so I'm probably not the best person to judge how Moonflowers sits in the Swallow The Sun discography. I can just tell you that it is at the very least worth you time. But what I can say from my own experience with their music is that my favorite album of theirs was Songs From The North, a triple disc album where each disc was a different genre, and thus saw them try out neofolk and funeral doom too. It's a concept that far too few bands try out, and I was curious to see how it would make Swallow The Sun evolve their sound. Then tragedy struck. And even if there were moments in the last two albums that tinge on neofolk and funeral doom, it's not much.

What did make me bring this up here is the fact that something did translate to Moonflowers: the multi disc approach. It might not be original music in another genre, instead being orchestral versions of the album's songs done by Trio NOX. But firstly, it's great to hear something other than goth doom from the band. Secondly, this is probably the Swallow The Sun album best fit for an orchestral version. And lastly, the orchestral version is even more concise, thus leaving aside all possible moments that dragged.

And I think that placing flowers on the moon is the best way to pay tribute to someone from the celestial plane.

Written on 26.11.2021 by
RaduP
Doesn't matter that much to me if you agree with me, as long as you checked the album out.
More reviews by RaduP ››