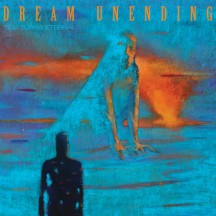 
Derrick Vella of Tomb Mold and Justin DeTore of Innumerable Forms join up to create death doom in the logic of dreams. But who is the dreamer?

Immediately upon hearing that a duo of Tomb Mold and Innumerable Forms members were releasing a death doom album on 20 Buck Spin, I thought I was in for a pretty straight-forward barrage of riffs and growls. Riffs and growls there are, but to say that Dream Unending play death doom and to leave it at that would be very very misleading. Tide Turns Eternal is an album whose main attribute is neither the pummeling of death metal nor the moroseness of doom, but in how left-field and hard to describe it is. I have heard music that was dreamlike, transcendental or psychedelic, but Tide Turns Eternal achieves that in such an odd way. And any attempt of me trying to describe how it sounds by a simple metaphor with some namedrops would not properly get the sound across.

Ok, let's choose a starting point. Death doom. Think the Peaceville Three, but then imagine the darkest My Dying Bride and the most airy of 90s Anathema somehow merged. The growls and riffs do have a somewhat 90s feel to them, both in the faster and the slower moments. But as I said, death doom is misleading. You'd have to add a bunch of goth rock, but only in a certain way, nothing that would sound too overt, but just that dark dreamlike atmosphere of it. And then, some Pink Floyd inspired ambiance too completely soften the death doom touch. And so much that it feels more ambient than anything else. Everything is just an echo of something from another plane. So to top it all off, make it all sound like the death doom version of Angelo Badalamenti's soundtrack for Twin Peaks.

I hope that is at least partly accurate. Tide Turns Eternal is an album that feels quite out of reach, like an old-school album that manages to take things of old that we've almost forgotten about, or at least present them to us in a fresh way. Taking aside all the ambient of this album and leaving only the meat, you could see some resemblance to OSDM, which was my initial expectation for this album, and another genre that takes cues from the old, but has become so commonplace that it feels like there's more of it now than it was then. But what I feel about Tide Turns Eternal is dyschronia. I'm confused about the time that this album transmits. It has those 90s leanings, but dripped in goth psychedelia and informed by everything that is going on in music now, it feels odd. For an extreme metal album, it's so skilled at creating these beautiful otherworldly feelings, I'm almost afraid that this is just music that exists in imagination. And that I'll wake up and realize that I never even wrote this review.

But that can't be. You know why? Because the creativity of my dreams simply cannot create music as great as this.

Written on 28.11.2021 by
RaduP
Doesn't matter that much to me if you agree with me, as long as you checked the album out.
More reviews by RaduP ››