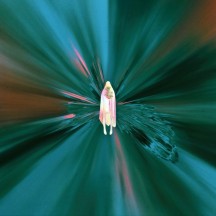 Having never heard of Silent Planet before, I can say that I dived in headfirst with zero expectations either way, knowing only that the band were described both as Christian metalcore and plain metalcore. Coming out of the band’s fourth album Iridescent, I find myself conflicted, with the album have such an ebb and flow to it that I enjoy and dislike it at a moment's notice; the one consistent thing, however, is that I continue to spin the album much more than I would for a record I at times dislike. One of the few albums I’m unable to pin down my feelings towards it, Iridescent is an engaging listen that will have you coming back to it without sounding stale, and with no more or less firm opinions towards it than you had on initial listens.

The shift towards greater electronic elements in post-hardcore/metalcore is something I’m weary of; while it keeps the genre somewhat fresh and gives bands a new avenue to move down, it is rare that it feels anything more than a gimmick. Silent Planet, however, do make the transition work for the most part and produce the best example of how it should work; “Terminal” and “The Sound Of Sleep” are enhanced by the band's use of electronics rather than it feeling forced into place or tacky. It enhances the tracks by filling in the space behind the band and pushing them to forefront of the song, making them sound heavier as a result.

Where the band succeed in utilizing new elements in the genre, they come up short with older elements, specifically, the use of breakdowns. The back-to-back endings of “Translate The Night” and “Trilogy” sound forced and included almost as a tick box exercise; where a breakdown does work for a track such as “Panopticon”, it is almost the exception rather than the rule. They exemplify the main problem with this album, in that several tracks leave me on the fence before a passage comes along and tips the scales against the track, such as with “Alive, As A Housefire” ending an otherwise good song with a generic rage-like ending.

There are two tracks on the album, however, that hooked me in instantly and gave me impetus to return to Iridescent when my opinion ebbed, those being “Second Sun”, with an anthemic and serotonin-pumping chorus crowning a solid track, and “Till We Have Faces”, which has something about it that just hooks its claws deep into your skin. The vocal tandem of Russell and Freckleton is often the difference between a good and a great song, providing some of the best vocals I have heard in the genre for a long time.

The biggest compliment I can give Iridescent is that it is the best album of a style I generally dislike, highlighting what said sub-genre can offer though just falling short of breaking the glass ceiling; however, they ensure to crack the glass and threaten to break through. Recommended listening for those who have not heard of the band before and for those who have yet to find electronic metalcore to be to their tastes.

Written on 09.12.2021 by
omne metallum
Just because I don't care doesn't mean I'm not listening.
More reviews by omne metallum ››