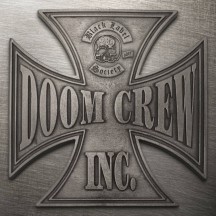 It's been a while since I could say I found myself enjoying a Black Label Society record, with recent albums not getting much beyond a casual listen for a while now. Doom Crew Inc. is an album that grabbed my attention and held it in a way that a record by the band hasn’t in a long time, with some highly memorable moments in amongst an otherwise mixed bag collection of tracks.

The most immediate element that hits you upon listening is that the guitar work on Doom Crew Inc. towers over recent releases in terms of quality, with great use of second guitarist Dario Lorina as someone to harmonise and interplay with, rather than to just hold down the rhythm section; this, as Wylde widdles off umpteen solos, gives this album a Thin Lizzy tinge, which makes this the most enjoyable Black Label Society has been since Order Of The Black. Tracks like “You Made Me Want To Live” and “End Of Days” feature memorable riffage that nails a classic rock vibe of the 70’s, while “Gospel Of Lies” and “Destroy & Conquer” play to some heavy-leaning stoner and doom tones. The exception to the case with Black Label Society albums has often been the ballads, with the band's attempts in this vein often the weakest point. “Farewell Ballad”, however, is carried by some great guitar work in the style of Joe Perry, ensuring the album signs off on a high note rather than just drawing to a close.

The problem with Doom Crew Inc. is that these great momentssit in amongst an otherwise mixed bag of quality, ranging from diamonds in the rough to straight-up forgettable, while suffering from the same shortcomings prior output by the band faced. The vocals of Wylde are his usual raspy fare, which can wear after a while; often times you find yourself ignoring him in favour of the guitar. On the ballads, this element is enhanced, thus leaning them into the aforementioned tendency to be amongst the worst tracks on an album as usual. “Forsaken” is a case where ignoring Wylde is near impossible except for the solos, leaving you waiting for them rather than anticipating them.

The recent problem of the band misusing solid ideas rears its ugly head again, with tracks like “Shelter Me” featuring an amazing blues-drenched solo on an otherwise forgettable track, meaning you have to sift through filler to get to the good stuff. With the ratio of good moments to minutes of filler weighted too much on the latter, Doom Crew Inc. too often fails to catch alight when it threatens to.

This album is an improvement on recent efforts from Black Label Society and their most memorable in years, thanks to the massive improvement in the guitar work. Beyond that, however, Doom Crew Inc. feels like just another by the numbers release, albeit with a few more highlights than on recent releases.