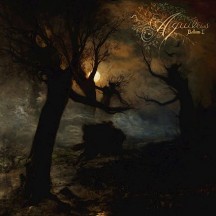 
A debut album heralded as a masterpiece, a long wait without any new music, and then a sophomore record announced to be but the first part of a two-part opus… where have I heard that before?

If you want to see what kind of esteem that Griseus, the 2011 debut record of Aquilus, is held in on Metal Storm, go to our all-time top 200 albums list and use the find tool to search for ‘201’ - after Mgla’s Exercises In Futility, Griseus is the second-highest ranked album on the list released in the past decade. Metal Storm loves Griseus, to the extent that its popularity here was mentioned in the post announcing its eventual successor. It’s understandable why so many adored Aquilus’s debut, with the combination of atmospheric black metal and symphonics bringing together intensity and grandeur in a fairly unique manner. Still, those fans that have long awaited a second full-length album from the Australian one-man project (helmed by Horace “Waldorf” Rosenqvist) probably started to assume that Griseus would be an isolated phenomenon, an 80-minute legacy to one man’s great ambition.

However, the fact that I’m writing a review is enough to tell you that this is no longer the case. Perhaps the Wintersun comparison in the introduction was unfair, but when I read that ‘the opus grew so furiously, the decision was made to split the work into two parts’ and ‘we believe Bellum I is a stunning tribute to perfection’, I can’t help but get Time vibes from the promotion of Bellum I. Still, if you work on an album for a decade and only release half of it, it seems quite likely that a perfectionist approach was driving the composition of the record. Therefore, expectations are likely to be sky-high in certain quarters for Bellum I.

The album starts off with that symphonic side I mentioned earlier leading the way; “The Night Winds Of Avila” opens Bellum I with emphatic piano accompanied by dramatic strings. The transition into metal is less grandiose; “Into Wooded Hollows” kicks off with something of a grim death metal trudge, albeit one seasoned with symphonic arrangements. It’s a fun opening track; between the male choirs, Opethian middle and doomy conclusion, there’s a lot going on. Admittedly, it does feel a tad disjointed at times, but when it’s in the swing of things, it’s a captivating display of symphonic extreme metal.

If “Into Wooded Hollows” was sprawling, “Eternal Unrest” takes it to the next level. The only song on the record (which, at 62 minutes, is positively compact compared with Griseus) to pass the 10-minute mark, there’s atmospheric black metal, Opeth-inspired prog-death (right down to the acoustic guitar break), Ne Obliviscaris-esque material and melancholic piano breaks, all capped off with stirring strings/synths (the violin during the section that’s reminiscent of NeO sounds very real, but I don’t know if all the string sounds are actual live instruments). I will say that, as much as the symphonics bring a real drama to the song, they do somewhat drown out the metal instruments at times on this song, particularly early on, which is a shame, as when you hear the guitars cutting through, it’s clear some really engaging stuff is going on.

Those familiar with Griseus will remember long periods of the album were dedicated to the symphonics, both with long non-metal sections within the metal songs, but also with entire tracks only for the piano and strings. This is the case again on Bellum I, with the likes of “Eternal Unrest” and “Lucille’s Gate” featuring sections purely comprised of piano or orchestral sounds, and “Moon Isabelline” and “Empyreal Nightsky” sticking entirely to piano or orchestrals (“Embered Waters” mixes things up by going in a dark ambient route). Personally, I think the former approach works better; “Eternal Unrest” is such a chop-changing song that these breaks make sense and add range to a diverse track, but “Empyreal Nightsky” doesn’t really have enough going on to justify running for nearly 10 minutes (some may differ, I’m sure the synth-ambient approach will resonate with a number of listeners). The piano work on “Moon Isabelline” is highly impressive, and as a one-off piece in the middle of the album I think it would make a strong impact, but knowing that there’s a fair bit more of the record in a similar vein reduces some of its appeal.

My feelings for Bellum I are actually quite similar to those I had for Griseus; there’s excesses and not everything flows naturally for me, but when it comes together there’s some quite excellent material here. By that logic, those Aquilus fans that have been anxiously awaiting more from Waldorf should find Bellum I to be worth the wait; certainly, I don't think this split sophomore record will be nearly as divisive as Time I was.

Written on 02.12.2021 by
musclassia
Hey chief let's talk why not
More reviews by musclassia ››