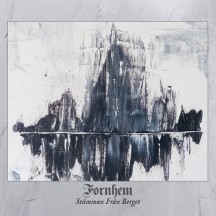 
A postmodern spin on old school black metal, insistently invoking the iteration involved in a decade of isolated introspection. As Nietzsche said, “The riff is dead, and eternal return has taken its place."

Fornhem is a trio from Norrköping, barely half an hour north of my home town. With acts such Marduk and Ofermod, it's as close to a black metal Mekka you'll find in Sweden, and Stämman Från Berget (The Voice From The Mountain) honours the basics of classic tremolo driven, 90s bands like Mayhem and Satyricon through a modern lens by incorporating post-metal vibes and a doomy folk aesthetic. The sound is very stripped down to a raw iciness not unlike Agalloch's Marrow Of The Spirit (their best album, wanna fight about it?), but even sparser, as the entire album is mostly carried by Thuleman's guitar melodies, supported by effective drumming and a somewhat odd-sounding chugging rhythm guitar.

Topped off by chilly, screaming vocals conveying themes inspired by Nietzsche as well as cursing runestones, Fornhem’s music comes off as being all about those ten years of isolated introspection Zarathustra spent on the mountain before heading back into civilisation only to realise he'd need to create a big spectacle for anybody to take him seriously. "Den Längsta Dagen" (The Longest Day) opens the album with a slow, seedy riff that, in spectacular fashion, evolves through a variety of tempos, atmospheres, and melodies to ten minutes later settle into a sort of raw, bouncy folk elegy. It's a very emotional and entertaining song, leading into the slightly dissonantly thrashy "Uþarda Spa" (Prophecy Of Ruin). The title comes from a runic inscription from Southern Sweden that ends with wishing destruction upon any would-be defilers of the runestone (and it seems to have worked, as it remains to this day), and the violent drums and seething, dissonant riffs make this the most memorable cut on Stämman Från Berget. Both these opening songs are undeniable bangers, but there's a "but" coming up...

Not so many years ago, I found myself in the unenviable position of, as they say, having lost everything I valued in life. Eventually, I decided that the only way forward was inward, and spent the better part of the next three years voluntarily segregated from the external world, except for the one or two days per week I went to rehearse with my band. Yeah, I'm a real trendsetter; the same month in 2019 I decided to give life a try again and moved back into the city, isolation became the global norm. Hey, at least I'd warmed up already. During these three years, the time I didn't spend making ends meet was basically reserved for self-analysis, with my sights set on forced personal transformation. It was tedious, thankless work at first, but after about a year I felt confident enough to assert myself that neuroplasticity is very real, and when all comes around, I'm in charge of my own mind.

Metamorphosis takes time and patience, however, and on the three songs that follow "Uþarda Spa", Fornhem opt for a much more repetitive, hypnotic approach. It mostly works, it really does, especially in the latter half of closer "Untergang" (Descent), where a blatantly simple doomy riff is repeated over and over… and over… to great effect until the end, alluding to the frightening monotony of the katabasis involved in active personal or spiritual development. It's just that, ahead of this song, "Fördärv" (Ruin) and the title track have already condensed the post-metal rollercoaster and merciless assault of the opening tracks into an iterative, slow-mid paced rumination that, over the course of a dozen listens, ends up being sometimes enthralling but at constant danger of wearing out its welcome.

The first half of Stämman Från Berget is rock-solid, raw black metal, at once old school and modern, while the latter half is ritualistic and moody, and as such, its success is highly dependant on the listener's mood. It's nonetheless a confident, honest, and ambitious album; both thought-provoking and entertaining, reverent and progressive. I bet Fornhem's future contains more great stuff to come.