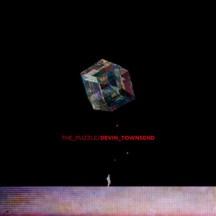 
Put the pieces back together again.

One of the more active artists throughout the pandemic, Devin Townsend has not let the grinding halt to the world of music stifle nor slow down his stream of creativity, producing several livestreams and albums of improvisational material throughout. Now, he is returning with his first studio album since 2019’s Empath and, alongside the twin released Snuggles, his first ambient album since The Hummer way back in 2006.

How much you enjoy ambient soundscape collages will be the main factor in how much enjoyment you get out of The Puzzle; for some, it will constitute vapid muzak that offers little and feels like the background audio track you find on many an OST, while others may find it a good way to unwind in the sonic pictures it paints in your mind. It effectively is the sound of creativity stripped down to its bare parts and are the faint sketch marks on a blank canvas which haven’t been built upon, whether this is your thing or not will become apparent soon after hitting play.

Unchaining his creativity from his already loose connection with traditional structures, The Puzzle sees Devin indulge in sound and creates what can best be described as sonic art, with tracks like “Perfect Owl” and “Light Year Whale” feeling more like a stream of consciousness than songs in the traditional sense.

The Puzzle is the more adventurous of the twin-released albums alongside Snuggles; while it features plenty of calm and wistful moments (such as the opening “Chromatic Ridge”), there are elements scattered throughout that will jolt you to attention as you float along in the ethereal rivers of noise that constitute much of the album. “StarChasm” does feel like a microcosm of Devin’s music as a whole, disparate elements thrown into a mix that on its surface makes no sense, but somehow it makes complete sense and is highly enjoyable as you listen along.

Much of the album feels like the sonic backdrops that pepper many a Devin song, with “Life Is But A Dream” sounding like an alternative soundscape that wasn’t used for “Genesis”. “Shark In The Ice” wouldn’t feel out of place as a bridge on a standard track on Transcendence, feeling like the blueprint to a track like “Stormbending”. With that said, “Hammerhead Sugarplum” also conjures up this same sensation, with it sounding like Devin decided to keep the song in this form rather than build upon it.

The Puzzle does well to engage you as a listener given its limited scope and tools at its disposal; while it is unlikely to occupy your full attention, it does keep you listening throughout and wondering where the album is going to next. The eclectic styles contained within the album make for an interesting listening experience and one that will keep you relistening more times than you may initially assume.