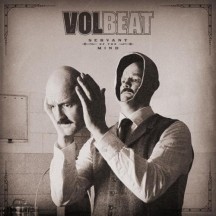 Coming off the back of a few years where Volbeat were seeing their momentum starting to slow, with each successive album being a paler imitation of the style of Elvis aping hard rock that had brought the band to such heights, Servant Of The Mind is a mini-make or break album for the band, one that could signal whether the band’s best work was in the rear view mirror or if the band were capable of righting the ship.

With expectations launched extremely high with a slew of singles that preceded the album’s release in “Becoming”, “Wait A Minute My Girl” and “Shotgun Blues”, Volbeat had me more excited in the band than I had been in years and, wouldn’t you know it, they produce the needed record to give the boost in the arm fans have been waiting for. Alongside the aforementioned singles, which rank amongst some of the best work the band has produced, Servant Of The Mind is a consistent and packed album that plays out for much of its runtime. While some songs, like “Temple Of Ekur” and “Heaven’s Descent”, don’t reach the same heights as the singles, they’re still highly enjoyable tracks that help give this album the strength in depth that recent records have sorely lacked, with “The Passenger” and “Say No More” proving to be solid tracks slotted around some of the best work of the band's career in “Shotgun Blues”, “Mindlock” and “Wait A Minute My Girl”.

Perhaps the biggest surprises are “The Devil Rages On” and “Step Into Light”, which both feature a smoky 50’s rockabilly vibe on top of a groove metal underbelly, giving the album a subtle variation that helps lend it a strength in depth that has been lacking in the band’s more recent output. With their wistful guitar riffs and brooding atmospherics, these two songs are a welcome deviation from the band’s formula without detaching themselves from Volbeat's established sound.

While Volbeat albums have always had a solid production behind them, Servant Of The Mind ups the ante with a bass sound that is firm and powerful, sitting perfectly in its own pocket throughout the whole album. Everything sounds shimmering and well placed in the mix, allowing for each element to sit beside each to the benefit of the song as a whole, with “Shotgun Blues” in particular sounding firm and aggressive without sacrificing any of its melody.

Servant Of The Mind does see Poulsen’s Hetfield-come-Elvis vocal stylings wear on your ears as they do on most Volbeat albums; while no particular track sticks out, you will find on extended listens that it starts to grate somewhat. The only track that lacks enough redeemable features is “The Sacred Stones”, a slow, brooding song that only really has some interesting guitar work to sink your teeth into, with the rest being skippable. While it does derail the album’s early momentum, Servant Of The Mind does recover immediately with the following tracks.

If you are firmly in the camp of disliking Volbeat, then this album is unlikely to persuade you otherwise; while the album does feature several soon-to-be-classics in the band’s repertoire, they don’t extricate themselves enough from the band’s past output to likely convert you. If you were to give the band another chance or you’ve not listened to them before, then Servant Of The Mind is an ideal place to start.

With Volbeat righting course, Servant Of The Mind breathes new life into a career that had been floundering in recent years, giving fans not only hope that the band can continue to hit new heights but also producing a slew of solid tracks that make such a correction of course such an enjoyable listen.