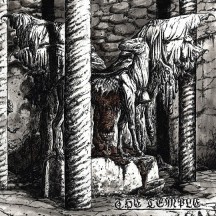 
Was the latest Ulcerate too calm for you? Don't worry, The Temple twist that into blackened death.

The Temple (NZL) (because a Greek band got to claim that name first on our database) is a duo comprised of current Ulcerate bassist/vocalist doing bass, vocals, and also guitars, and ex-Ulcerate vocalist (who was on the early demos) switching to a drumming role. The whole thing is produced by current Ulcerate drummer and also Ulcerate producer Jamie Saint Merat. So, basically, Ulcerate. Despite being supposedly active for more than a decade, this is The Temple (NZL)'s first release.

Obviously there are a lot of comparisons to be made to Ulcerate, lineup connections and all, but the sound isn't too dissimilar either. You know. Big dissonant grooves. But whereas Ulcerate dwell in tech death, The Temple (NZL) is more tectonic, a labyrinth of doom, a murky beast of its own. And even if I drew a contrast between this and the latest Ulcerate, that's actually the Ulcerate album this feels closest too due to its emphasis on atmosphere. There's plenty of doom filled sections who do their best to exhale a sense of dread, melodies so bleak they feel almost hellishly melancholic.

And even if The Temple (NZL) pulls back on their original band's technical sound, they instead put their chips on writing compelling songs to fit that bleak atmosphere. It knows when to push and when to pull, when to be pensive and when to be pummeling, and how to make both of those feel both complementary and strong on their own. And for a band literally called "The Temple", there is a sense of ambiance that feels almost ritualistic, and with a philosophical theme centered around Gnosticism, and all that chaos, war, and pestilence stuff, the way they build their atmosphere does bring up quite fitting images.

It isn't a new Ulcerate, nor should The Temple (NZL) be seen as merely an off-shoot. I'm just saying that if you love one, you'll love the other.

Written on 08.12.2021 by
RaduP
Doesn't matter that much to me if you agree with me, as long as you checked the album out.
More reviews by RaduP ››