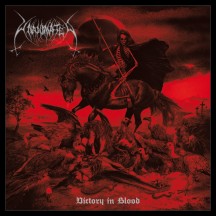 
So... do we count it as a second comeback album?

Unanimated is a pretty cult band in melodic black/death metal, emerging on the scene in 1993 with In The Forest Of The Dreaming Dead, around the same time that both the black metal and the melodic death metal sounds were barely starting. But it was their 1995 album, Ancient God Of Evil that proved to be their magnum opus. Despite coming out at pretty much the right time, these two seemed to mostly be appreciated by people in the know rather than becoming household names. The band broke-up in 1996, reunited more than a decade later and came out with a reunion album in 2009's In The Light Of Darkness, an album that was pretty good, but still couldn't really compare to the band's classic material. The 2010s only saw the release of one EP in 2018, so this marks the release of the first Unanimated album in more that a decade. I know the band didn't split in the meantime, but if you ask me, that's still pretty much a comeback album.

Partly it is because I feel like Victory In Blood is a more worthwhile album than In The Light Of Darkness was. In a very surprising way, the band sounded older on that album than here, even if the lineup is almost the same, with the old drummer being replaced by Anders Schultz of Unleashed who is not young, and the addition of a second guitarist in Jonas Deroueche of Carbonized, who is also not young. The band doesn't sound young, but they also don't really sound neither like a band that played for 30 years nor like a band that took a 12 year recording break. For better or worse. The good thing is that these are vets that clearly still have it in them and can come up with riffs and melodies pretty continuously. They're not always as exciting as they were 25 years ago, but they do the job.

The bad is that they're not always as exciting as they were 25 years ago, and for an album that nears the 50 minute mark, it sometimes feels like they were trying to be a bit more reticent on the editing field to make up for the long absence. The result is something that has very hard-hitting moments, but also moments where things feel a bit left on autopilot. I don't really expect Unanimated to recreate their classic days, especially after so long. And a lot of the blends between black and death are so well done here that it's hard to really separate the two, as if they never were separate genres. And more than just the blend of the two (since the band has been blending them for about as long as they've actually been genres), but sprinkled throughout Victory In Blood, there are moments that genuinely do something interesting with the music that's both melodic and aggressive.

I find it easier to compare Victory In Blood with In The Light Of Darkness than the band's classic duo of albums, because obviously those are quite hard to match, but also because these two comeback albums ought to make me excited that the band is back and that we might hear more from it. And that some people might discover Ancient God Of Evil for the first time because of them. It's just that Victory In Blood does it slightly better.

Written on 12.12.2021 by
RaduP
Doesn't matter that much to me if you agree with me, as long as you checked the album out.
More reviews by RaduP ››