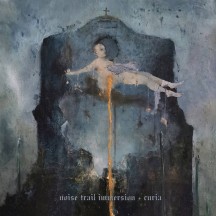 
Déjà vu has felt more common since the start of the pandemic, but déjà vu isn’t always a bad thing.

I saw one review describe Noise Trail Immersion’s previous music as being the work of ‘the unholy lovechild of Blut Aus Nord and Deathspell Omega'; whilst dissonant black metal is a feature of Curia, it is much less so than on 2018’s Symbology Of Shelter. Curia is instead a spellbinding mixture of black metal, post-metal and elements of mathcore, with three “Riesistere” tracks comprised solely of classical guitar included to emphasize additional influences from dark folk and liturgical music. Whilst post-black metal has regularly appeared on my radar in the last couple of months, the math and dissonance featured here are much less frequently incorporated, so Curia stand alone from bands such as Der Weg Einer Freiheit, and they stand out for very much the right reasons.

After the first of those “Riesistere” tracks is out of the way, it doesn’t take long for all those influences to coalesce; there is aggressive dissonant blasting, sharp contorted math sequences and ominous dynamic atmosphere to be encountered on the first ‘proper’ track “Demiurgo Del Non Ritorno”, as a song that starts off chaotically and uncompromisingly slowly segues into more traditional post-black territory, and as demented shrieks are replaced by post-metal screams in the vein of Cult Of Luna’s Johannes Persson. There’s a clear template set here that subsequent track “Dimorare Nella Carne” follows almost exactly, albeit taking a turn for the dissonant later on rather than diving into chunky post-metal riffing.

The band know how to mix the components up across songs; “Eclissi Unanime”, perhaps the strongest song here, moves very much in one direction, from echoing clean post-metal build-up early on through increasing dissonance and intensity towards an extreme and grim climax. Some synths and clean vocals are dabbled with on this track as well to bring in a bit of that liturgical influence, which is something that works well and could be expanded upon further if Noise Trail Immersion stick with what they’ve developed on Curia. The song that bears the album’s name is another one that stands out; an instrumental piece, “Curia” is dominated by tremolo, some of it almost melodic, and the result goes in a strikingly different direction sonically to the vast majority of the rest of the record.

An intense and electrifying fusion of challenging, mathcore-influenced dissonant black metal with eerie post-metal dynamics and atmosphere, Curia is a bold step forward from Noise Trail Immersion and one that justifies their arrived on the roster of such an acclaimed label for esoteric metal.

Written on 13.12.2021 by
musclassia
Hey chief let's talk why not
More reviews by musclassia ››