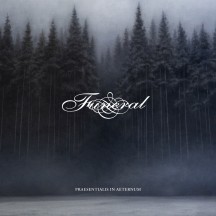 Funeral is a band that really hit it big by choosing this band name. It is probably the most "doom metal" band name you can probably think of, and they actually used to play funeral doom back in the day. But despite being pioneers for funeral doom in the mid 90s, with Tristesse and Tragedies, those albums don't really get as much attention as other pioneering funeral doom acts. And, to be honest, they're albums that I respect more than I actually enjoy, since they pretty much embody the things I dislike about funeral doom. But the band dropped the funeral sound for something closer to gothic doom around the turn of the century. But, even with those album I never really felt like Funeral were really hitting it big. Especially since there was a pretty noticeable downward trajectory after 2006's From These Wounds. I can't say I was expecting much from this record, but with the 9 year gap since the previous album, thinks might be different this time around.

The Funeral album that Praesentialis In Aeternum is closest to is obviously the previous one, 2012's Oratorium, since that one presented a pretty new lineup, and a bunch of the members introduced then, like vocalist Sindre Nedland (also of In Vain) and bassist Rune Gandrud. So Praesentialis In Aeternum has an original member, a slightly older member, two members that were on the previous album, and two new members, so it still is a bit of a reinvention. And with how long the band has been sitting on this material, I guess it's not surprising that it doesn't feel quite like the previous albums. In a pretty weird twist, I'm actually connecting with Funeral more than I ever did. On one hand you have the best vocalist that Funeral ever had, but you also have the songwriting to back him. And I guess that is this album's winning formula.

Don't get me wrong, I still don't think the album is mind-blowing or a massive achievement, but it's very rare that bands at this stage in their career who have never impressed me, do it 25 years in. I'm not sure if this is a better album than From These Wounds, but, hell, it might be. For a band that pioneered funeral doom, but slowly replaced that part of their sound, I feel like Praesentialis In Aeternum brings back some of it, or at least a more death doom version of it, that works really well with the gothic overtones. I already mentioned the vocals, but that is because both the clean vocals and the harsh vocals manage to work really well with how the two doom sounds are merged, and maybe some of it is because they're sung in Norwegian this time around. But there's also some props to be given with how the drumming, from sole remaining original member, Anders Eek, manages to imbue the music with such a mournful force; and how the orchestrations from new keyboardist André Aaslie give the album a pretty neat symphonic tone that isn't overbearing.

So, kudos to the band! Praesentialis In Aeternum is the late-career highlight that I never expect. It sounds like a band that took years to finally land on a winning sound, and now they finally did.

Written on 19.12.2021 by
RaduP
Doesn't matter that much to me if you agree with me, as long as you checked the album out.
More reviews by RaduP ››