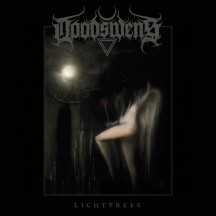 Formed in 2017, Doodswens (“Death Wish” in Dutch) juxtapose their short existence with a notable resume. Just after releasing their first demo, they were already invited to Roadburn Festival 2019. Unfortunately I missed that set, which is a shame because the premise was more than intriguing for me, as the Dutch black metal scene is currently booming. There is also the fact that Doodswens consist only of two young women that deliver simple yet highly effective black metal. The duo wear their influences with pride and distills them into a very cohesive and precise album in just 36 minutes.

The 90’s sound has been nailed nicely with a very punchy sound. The fast riffs and savage drumming follow the Darkthrone route with the opener “In Mijn Bloed”. It’s primitive yet rich, and it sets a good contrast with the songs that follow. The two longer tracks, “Zwarte Staar” and “Eindzicht”, form the core of the album and slow down the tempo to doom-like levels. Fans of depressive/suicidal black metal will find plenty to enjoy in these simple yet heartfelt tracks that are cold, droning and dripping with melancholia. There is a distinct charm in creating music with such a simple set-up. The duo focus solely on their two instruments and vocals, and the result is highly hypnotic at times. A comparison with an iconic duo like Urfaust is therefore not unfounded. The trance is sometimes broken, however; galloping riffs grab the listener and throw them into a vortex of blastbeats and riffs filled with inspiring conviction, strength and beautiful undertones that remind me a bit of the first works of Wolves In The Throne Room.

The album ends without notice and the replay value is quite high. Despite its lack of originality, Lichtvrees impresses me as it covers different aspects of our beloved black metal cult. All is done through simple means but very clever songwriting. Doodswens clearly do not need anything fancy to grab your attention. Their essence is pure and charismatic.