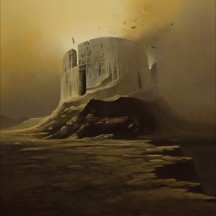 
Considering the fascination with ancient history and cultures that exists within the metal genre, it is at times surprising to me that we don't see more bands exploring the subject of Persia, no doubt one of the most important civilizations in human history. Never fear, though! The captivating Dakhma are here to offer a bit of fill for that void.

A familiarity with Persian history can easily reveal what's going on here with this band and album. The album cover, true to the band's name, depicts a dakhma, a sort of tower where dead bodies were left to be disposed of by carrion and other scavengers, utilized throughout much of the ancient Middle East and Central Asia. And the title, Blessings Of Amurdad, refers to a concept in Zoroastrianism, that peculiar faith which for many years served as the state religion of the Achaemenid Empire and its successors.

Accordingly then, on Blessings the young Dakhma launch into an intimidating, superbly composed brand of Persian/Zoroastrian - themed death metal. The band are covering a lot of bases here, and the mood of the time period they're addressing most definitely manifests in their music. For the most part a crunchy, riff heavy sound indicative of heavy OSDM influence dominates here, variating between uptempo assaults ("The Cry Of Filth") and a more midtempo, almost doomy approach ("The Gaze Of Ahura," "Atash Bahram"), and a pleasant contrast is made between the two.

There's definitely some similarity here to other Middle East - themed extreme metal, such as Nile and Melechesh, and fans of either will surely enjoy Blessings Of Amurdad. But this comparison is a bit unfair to Dakhma, who aren't quite groovy to the point of Melechesh, aren't as blast - heavy as Nile, and in some ways display more layered songwriting than either. The bulk of Blessings may be composed of gritty death metal, but there is definite subtlety here that reveals more of itself with each listen: chants, almost folk - oriented acoustic passages, call and response between Dakhma's front man and the backup vocalists, and more. One only need sift through the sands of Ecbatana to find it.

Blessings Of Amurdad ultimately wins out not just for the originality of its subject matter, but more importantly for the impressive musical execution that reinforces it. There's a bit of something for fans of all types of death metal here: speedy aggression, slow contemplation, atmosphere, and, yes, riffs for dayz. And there's certainly something for the history nerd here as well: careful study of the track titles and lyrics here will probably reveal a whole plethora of information. Give Blessings Of Amurdad some intimate, attentive listens. This is a death metal AOTY sleeper for sure.

Darius is growing angry with the rebellious Greeks in Anatolia who have been arousing his ire, and is about to launch a crusade against them. Will ye join him and the Immortals in this venture?

Written on 28.12.2021 by
Apothecary
Comforting the disturbed and disturbing the comfortable since 2013.
More reviews by Apothecary ››