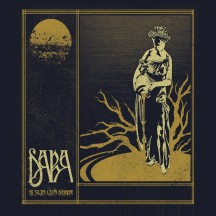 
If you thought that Negură Bunget, Dordeduh, and Kultika are enough Romanian bands releasing records in 2021 after a long time, you're wrong. There was room in the very final days for a more obscure one.

Dara (or Dara Project, as they fancy themselves) is part of the Timisoara scene that Negură Bunget used to be part of, and you can absolutely be certain that I could fill this entire section just with namedrops. Two Dara members also had a stint in Negură Bunget between 2010 and 2013, the keyboardist Inia Dinia also having been a live member of the band and of their Din Brad off-shoot, whereas Fulmineos (whom was one of my first interviewees) is a man of a million projects, with Argus Megere, Ordinul Negru, Kultika, Katharos XIII, and Fogland, being worth mentioning. He's been active in the scene since the mid 90s, mostly in black metal bands, but to be honest most of the worthwhile stuff has been made since both of them left Negură Bunget. That includes Dara's Dreptarul Viselor.

Giving Dreptarul Viselor another listen recently, you can clearly tell that a lot of it feels like it was done by neo-Negură Bunget members, with the instrumental side often feeling like a more post-rock focused of that band's sound, right after you strip all its black metal and half of its folk. The result focuses on folk in a pretty different way, but feels incredibly familiar in its soundscapes. It toed the line between post-rock and post-metal, not shying away from the occasional heaviness, but not being grounded in a single genre. Hence why I don't think you could really call it a metal album, and without the lineup connections it might not even be featured here. And even while sounding so close to another band, it was Valentin Vizuroiu's theatrical vocals that really made it sound unique.

Now when it comes to Și Glia Luă Nume, there's three conflicting facts about it: Valentin Vizuroiu is a good vocalist, Valentin Vizuroiu's vocals worked wonders on Dreptarul Viselor, and Valentin Vizuroiu's vocals absolutely ruin Și Glia Luă Nume. Ok, maybe I'm too harsh, but I had to relisten to Dreptarul Viselor specifically to check if I wasn't misremembering the vocals working. But they do! It's like a fever dream. Whereas they sounded focused on Dreptarul Viselor and they did their best to serve the songs, even at their most theatrical in "Robii Slovelor De Veci", on Și Glia Luă Nume it feels like there's no quality control in terms of the vocal lines. There's only so many "oOoO"s and "eEeE"s that one can take. And ironically, the most outrageous of these happen early on in the album, tainting it early on. The deeper I get into Și Glia Luă Nume, the less I seem to mind them, and the harsher vocals especially are still fantastic. But then "Năpasta" comes on and... ugh...

The vocals are not the only different thing though. There's barely any moments in here that remind me of Negură Bunget, the band instead taking more cues from metal, jazz, and post-punk. This does result in a lot of moments that feel uniquely Dara, but as a whole I find that things just don't really gel together. Be it the weird production or the band going for a more natural unpolished feel, Și Glia Luă Nume feels like it contains a collection of disparate moments that I enjoy, but nothing that I can properly connect to. Which is, as I ought to emphasize, quite fucking depressing for the long-awaited follow-up of an album I loved so much. It feels like for every step in the right direction that the band took, it took three more in completely random ones. And this makes the moments on Și Glia Luă Nume that work even more frustrating, because they show that this really could have worked.

There's enough worth salvaging here, and I am not gonna lose my faith that Dara will come up with a more focused effort the next time around. I just hope it doesn't take six years. In the meantime, we'll always have Dreptarul Viselor.

Written on 03.01.2022 by
RaduP
Doesn't matter that much to me if you agree with me, as long as you checked the album out.
More reviews by RaduP ››