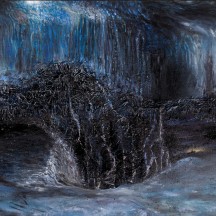 
This album is about as icy as the artwork adorning its cover.

And seriously, just what is that artwork (by the talented Vama Marga) depicting exactly? A glacier, or iceberg of some sort? A massive storm, perhaps? Whatever the case, it gives off something of a cold and imposing aesthetic, an aesthetic splendidly reinforced by the music of Vertebra Atlantis. An Italian trio, new on the block, the members here may ring some bells of familiarity. There's G.G. (of Cosmic Putrefaction note) on guitars, R.R. (HomSelvareg) on drum and vocal duty, and Vrangr from Spells Of Misery strumming away on bass.

Lustral Purge In Cerulean Bliss is the debut of this new group, offering up a pretty thick cut of monolithic death metal underscored by some black metal spice and shades of dark, ethereal melody. With this Vertebra Atlantis serve up some pretty crunchy, riff - heavy bangers, but thankfully their formula is not entirely one dimensional, and for a debut here the band shows a pretty commendable ability to not lose focus on any one gear for too long. You might, for instance, get a track like opener "Agoraphobic Solipsist," that begins with uptempo clawing before descending into slower, more rhythmic plodding toward its end. Or the opposite may happen, as on Lustral Purge's title track, where a more restrained opening approach becomes gradually more intense over the course of the track.

The blackened death metal core on this album is delightful enough on its own with both Old School and New School touches to it, but it would get a little boring without some additional oomph of ambiance sprinkled on top. Vertebra Atlantis attack this angle as well, maybe not as much as I would've been looking for, but enough to make a difference in their grand equation. "Altopiano Celeste," for instance, is eerily hypnotic with its quasi - symphonic air, and closer "The Hermit Strums A Mournful Dirge" is perhaps the strongest example, with its dreamlike, lulling guitar melody. Hopefully Vertebra Atlantis will explore this type of approach more in the future, as it reveals a much more dynamic, introspective aspect of their songwriting.

Lustral Purge In Cerulean Bliss could use a wee bit of refinement to make it stand out a bit more, but for the most part it's a pretty solid entry from some death metal aficionados already familiar with the game. Vertebra Atlantis are certainly at no loss here in the realm of aggression or a sort of catchy momentum to their compositions, and that's the main thing that counts with this brand of metal. For now, Lustral Purge In Cerulean Bliss can stand pretty fairly as one of the better debut albums of 2021, and one that hints at much greater things that can (and likely will) come from the parties involved in the future. One to keep on your radar, for sure.

Written on 04.01.2022 by
Apothecary
Comforting the disturbed and disturbing the comfortable since 2013.
More reviews by Apothecary ››