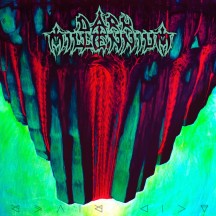 An album of seven songs, clocking in at seven minutes each, released on the 7th of January. I am surprised that Dark Millennium didn’t wait until July to release it but I am sure glad they did it now so that you and I have the opportunity to start the year with such a great piece of music.

Dark Millennium go far back to the early ‘90s and their debut, Ashore The Celestial Burden, is a must-have for fans of progressive death metal and doom death metal. Unfortunately, they disbanded after their (very experimental) second album but resurfaced in 2016 and Acid River is the third full-length of their second phase as a band, and, in my opinion, their best since that amazing debut.

Acid River is not a concept record as such, but it does feel as if a river of acid runs through the album connecting its songs. Musically, it is intricate, heavy, and sombre, showcasing numerous twists and turns throughout its runtime. It is primarily a progressive death metal album that often embraces the doom death metal style. Dark Millennium do have their own sound but I enjoy hearing elements from a few of my beloved bands during the course of Acid River, from Disembowelment to Phlebotomized and from Voivod to Death. As far as the vocals are concerned, I expect them to be an acquired taste for many people, sounding like someone put the cords of Chuck Schuldiner, Martin Van Drunen, and John Tardy in a blender.

The general feeling of Acid River after many careful listens is that it moves forward without repeating itself, in the sense that there is something new appearing from every corner. That said, if there is one flaw that I found in the album, it is the fact that at times it feels as if some segments are being played out for longer than they should, only for each song to be able to go just past the 7-minute mark. But I cannot say that this took away much from my general enjoyment of Acid River. It is not an album of obvious hooks as such, but it mostly relies on its multifaceted character. My impression is that gets better as it goes along, with “Threshold” (the first single) being a song that truly stands out, “Lunacy” going for a more carnival-esque and spooky mood due to its use of keyboards, and the album peaks with “Essence”, which is the song that is perfect from start to finish. The closing track, “Death Comes In Waves”, is the most atmospheric one and a wonderful conclusion.

I shouldn’t forget to praise the sound and production; the band went full-analogue for the recordings and they also used their original equipment. As a result, the music feels warm, organic, and enveloping.

So, the first worthwhile progressive death metal of the year is already here, very early on in the year. Do check it out.

“A long cold winter
In our world begins…”