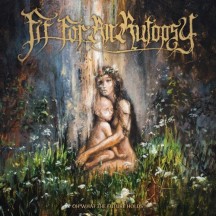 
A Bright Future Lies Ahead.

Alongside Whitechapel, Fit For An Autopsy have been pushing the boundaries of deathcore to great success in recent years; Oh What The Future Holds is confirmation that the band are now reaping the rewards for years of development with their strongest release to date. While the band have long been producing some of the best deathcore music over much of the last decade, they haven’t cemented themselves as among the top tier of said genre; with this release, however, the band take their place at the top of the table at long last.

“Far From Heaven” and “In Shadows” have a Gojira-esque groove that will pound its way into your head, blending sonic tones into the overall mix of the album that enhance its appeal. This confluence of sounds is twisted into its own shape, giving listeners an enjoyable listening experience that is unique and quality enough so as to not feel like a mere pale imitation. Oh What The Future Holds also has a vibrant metalcore element to it that allows tracks like “Collateral Damage” to add a further dimension to proceedings without sacrificing heaviness or enjoyment.

These songs fit in well alongside the more traditional tracks, such as early highlight “Pandora” and “A Higher Level Of Hate”, which see the band dig deeper into their roots and their deathcore past to produce some hard-hitting moments that bring this whole collection of disparate influences into one neat package, thanks to a solid production job from guitarist/producer Putney. Putney’s dual role as guitarist/producer ensures the visceral and complex riffs of tracks like “The Man That I Was Not” stand tall and feel vibrant, even when the complexity of such arrangements risks collapsing under its own weight. This is in addition to the usual musical quality that Fit For An Autopsy bring to the table. Baldolato remains one of the stronger vocalists in the genre, with his powerful growls proving to be the final element to complete the likes of “Collateral Damage” and “Two Towers”, ensuring that the album has a strength in depth, even on its deeper cuts.

The album does, however, stumble towards the end of its run time, with “Savages” and “Conditional Healing” feeling slightly unseasoned in comparison to what has come before it; while not bad tracks, they are the runts of an otherwise strong litter. The drumwork of Orta also feels like the one element that doesn’t evolve alongside the rest of the band; while it gives the band an anchor on which to hold proceedings down, it does hinder the band’s forward progression in equal measure, feeling stuck between two worlds of the band’s past and the future they are quickly moving on to.

While the band’s new found conglomeration of tech-infused riffage, melodic flourishes and deathcore is a potent mix for those of that persuasion, it is likely to be only a big crack in the glass ceiling for those who keep their distance from the deathcore genre, rather than the glass-shattering breakthrough that sees the band make fans of detractors.

Throwing down the gauntlet, Fit For An Autopsy start 2022 off on a very high note, to which metal fans should rejoice if other bands succeed in leaping over the high bar Oh What The Future Holds sets. That's a challenge I hope other bands take up; for now, the January blues should be incinerated in the face of this beacon of quality.

Written on 20.01.2022 by
omne metallum
Just because I don't care doesn't mean I'm not listening.
More reviews by omne metallum ››