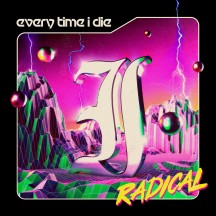 
A posthumous dissection of a metalcore great's final album.

Wow, would you look at that! I'm doing another 2021 review! I really hadn't planned for this to happen, but I'll explain myself. See, Every Time I Die was one of the first metalcore bands I really opened up to with 2012's Ex Lives. Fast forward a couple of years and good albums, Radicals would be the first ETID album released after I became a reviewer. However the cover art is... unappealing at best, plus I got bugged down in a lot of the other stuff I was already writing about. So I said to myself that I'll review the next album that they do. Fast forward a couple of months and... oh, ETID is not a thing anymore. Well, then I noticed that there are no reviews on Every Time I Die's profile. And since Radicals was released in late October, I guess it's still recent enough that it falls in the convenient timeframe for a main page review.

I guess one of the reasons why this is my only chance at an Every Time I Die album is because of how long they took to make this album. While previously they could come out with new ones every two (or maybe three) years, this one comes five full years after the last one. And I guess that's also why this is the longest of their albums. ETID has been a band that worked really well in the 30-40 range, so it's weird seeing them overextend over 50 minutes. But they were already a ridiculously consistent band, which is really not something you could say about a lot of their peers from the early 00s, and that consistency extends here. It isn't really much of a jump from the sound of Low Teens, with mathcore taking a pretty big part of the band's sound, and all of it dipped in just a bit of southern rock twang. And just like Low Teens, it has Will Putney doing the productions, so you know that there's gonna be some muscle behind the riffs and it's gonna sound like it.

And I guess the biggest reason to love Radical is how it manages to find the balance between metalcore and mathcore. The mathcore adds just the right amount of chaos and vitriol and making the riffing feel abrasive and dissonant. The metalcore stream-lines it a bit to make it more direct and make it a bit more accessible, plus the many moments that move away into cleaner territories. And while the entire band aces this sound, it's really the sledgehammer that is Keith Buckley's vocal performance that stuck with me the most. It's an album that borders between being tongue-in-cheek playful and being wholly sincere in its anger. And, I mean, could you expect an album called "Radical" to not be political? I would reckon that songs like "Planet Shit" would've been incredibly scream-along worthy. But alas, the posthumous nature of this review comes into play, and none of us will get to scream along with it. Unless the band reunites in the near future and I'll look like an absolute fool.

So I guess the only thing that I can say about this album with the added hindsight knowledge of the band's breakup is that Radical really doesn't sound like a band on the verge of internal disintegration. The band gels together amazingly, and maybe if they picked a better cover art I would have an easier time seeing this for the highlight that it is.

Written on 24.01.2022 by
RaduP
Doesn't matter that much to me if you agree with me, as long as you checked the album out.
More reviews by RaduP ››