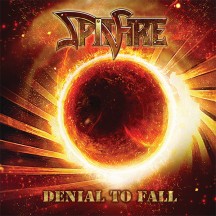 
You may know the Greek metal scene through its more extreme output, but there is one traditional heavy metal band that formed back in the mid-eighties, and - surprisingly - they are still around and they refuse to fall. This band is Spitfire.

Spitfire were the first Greek metal act to sign with a big international label. Their debut, First Attack, came out through EMI but tragedy hit the band even before its release when vocalist Dinos Kostakis had a motorcycle accident and went into a coma for two and a half years. The band pushed on and tried to continue without Kostakis but a variety of reasons (labels, egos, great expectations, etc.) did not allow them to fulfil their potential. Spitfire became a revolving door for musicians to come and go with guitarist and main songwriter, Elias Logginides, being the only constant member. The band died and resurrected numerous times during the last three decades and released another album in 2009, entitled Die Fighting, which had a more dark, epic and brooding character than First Attack. And now, 13 years later, the third full-length of Spitfire is in our hands.

Denial To Fall is what its title says and then some. It is an album of a band that shouts “we are still here, we are still standing, and we will keep on playing heavy metal”. It is traditional metal with a modern sound and it follows the old fashioned pattern of an album having two sides; A and B. So, if you get the vinyl, the track order places the two most energetic songs at the beginning of each side. “Stand And Fight” boasts uplifting riffs, keyboards that make everything sound bigger, soaring vocals, and a guitar-hero type of solo, while “Ready To Attack” is a total banger, a menacing and speedy track that sounds a lot like modern Judas Priest.

Judas Priest are not the only old timers that Spitfire always had a love for; Accept were often a major influence. On this album, the Greeks have included a blatant homage song to the German band, which is none other than the title track. There are many classic influences here (Saxon is another obvious one) but Spitfire do not sound like a cover band by any means; they are just a band that draws sounds and nostalgia from great metal music makers and present their own interpretation in a very satisfying new package. “Wasted”, for example, reminisces Helloween and has some great vocal melodies, while “Unholy” has an epic power metal character similar to what Queensrÿche did before Operation: Mindcrime.

A very pleasant surprise for me was “Many Lies”. I thought Spitfire had used all the songs of their ‘90s demos on Die Fighting but this track has been unearthed from that era and it is one of my favourites here. It has immense groove, an awesome bass line, and feels like it could have been part of Metallica’s Load or Reload (or probably not, it is too good for either of them), not just due to its style but also because Tassos Krokodilos sounds so much like Hetfield on this one.

And, since I mentioned the vocalist, allow me a moment to talk about him. So, Kostakis (R.I.P.) on First Attack is inimitable, Hannibal does a very good job on Die Fighting, but Krokodilos is really a revelation on this one. The man’s voice is so fitting to this music and he is so talented; I have seen him live with his Manowar tribute band, Fire And Steel, and he knocks it out of the park. He is also singing for the heavy/power bands Blind Justice and Hesperian Opus, where he often resorts to a higher register, but his voice here is different, more “manly”, and sounds grittier than anything he’s done in the past.

Moving on from the vocals to the guitars, those are what they need to be on a heavy metal album. The riffs make you want to bang your head, the solos are very good, and the compositions ooze that old-school heavy metal spirit but they also have volume and are firmly placed on today. The album is full of life and energy and there is not a single ballad on it (which is actually a shame because Spitfire have written some fantastic ballads in the past).

The cover art does not really connect with the album title but it is very relevant to the musical content. It depicts a bullet coming out of a gun barrel and being directed straight at you. In your face, so to speak.

This has been a long review so here’s the tl/dr version for the ones who like to cut to the chase: Denial To Fall has great sound with modern production and not some retro / let’s_sound_like_the_’80s shit; Spitfire don’t need that, they have it already on First Attack and it is perfect for the time it came out. Above all, Denial To Fall has sing-along choruses, superb vocals, and riffs and solos that are not mind-bogglingly complex or anything but they are pure and true, heavy fucking metal. And I am more than okay with that. In fact, I play it all the time since I got the promo and I love every second of it.

As far as I am concerned, Spitfire still flies high. And I don’t see it coming down anytime soon.

“Because I’m here
I stand straight up
Unwilling to obey”