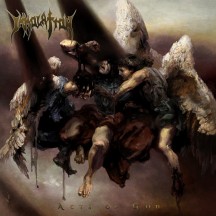 
How many death metal bands can boast about a career of over 35 years and 11 full lengths with no real misfires? Immolation can, but they don’t seem particularly content. They can still get heavier.

Immolation’s all-encompassing sound put them in the rare situation of not having many similar peers. Thus, they could get away with few changes in their formula. It is not an easy thing to achieve though. Being almost 4 decades in the business, it is obvious that Immolation attracts those who are in love with the old school death metal sound. The cavernous vibe is kept intact with low-tuned, crushing riffs that chug their way through speakers with imposing force. Brutal death metal aficionados can also get a kick out of Immolation, as their songs often come across as extremely violent and unhinged. Ross Dolan’s growls are also a reason for this; what they lack in variation, he compensates with an overly monstrous tone. Despite the sheer brutality of their infernal sound, Immolation added a sophisticated touch to their blasphemous music from the very beginning. The drumming unleashes complex fills and blast beats that throw the listener into a vortex of maddening chaos in a similar way as modern acts like Deathspell Omega or Ulcerate do. This rollercoaster from hell is further enhanced by the alarming and vibrant nature of the wailing leads and solos. These two elements are then combined with groovy and catchy riffs that would make fans of highly technical death metal take notice.

So, as you can figure out by now, Immolation is a band that can appeal to most fans of our beloved death metal cult. Have they succeeded yet again with Acts Of God? I left you hanging for so long that I’ll keep it short: Yes!

All the band’s elements are present. Even older aspects of their sound and aesthetic are back; Acts Of God recalls their old classics by being much more dangerous, blasphemous and all around more evil than a good chunk of their previous discography. The production is a teensy-weensy less clean than the last couple of albums, which works in their favor as the riffs gain much more bite. It is still a very polished release though, with the bass in particular getting a lot of attention. With 15 songs and a length of over 52 minutes, the songs are quite short. Immolation takes care of this by keeping things interesting with a vast amount of riffs, drum fills, and solos that make the album flow as one. At first I was unsure about the album’s length not being well justified, but not only is there enough variation, but also enough moments in between the songs to catch your breath, with slower sections and a more atmospheric tone on the solos that evokes sorrowful landscapes.

When it comes to long-standing bands, the question of originality is demanding. But originality is not entirely dependent on the band itself. If there is only one band that sounds like that, I feel more positive about it, than if a whole bunch of imitators have saturated the sound. This is the case with Immolation; it is easy to hear a song of theirs blindly and say “yup, that’s them”. The wailing leads, the "cyclical" and frightening drumming, all the brutal heaviness of their technical sound that somehow still taps on atmospheric ground from time to time. It’s all theirs to capitalize upon.

Acts Of God might very well be Immolation’s best album in 2 decades. This album is proof that you can stick to your guns for a long time and still come up with some of the best death metal in the business. Immolation remains unmatched and refuse to be content.