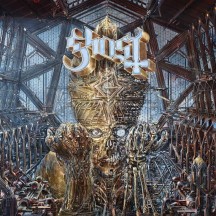 
"If You Have Ghost", you have arena rock in ABBA clothing.

Say what you will about Ghost: Opus Eponymous/Infestissumam/Meliora/Prequelle was the best; it is/isn't/was/never was metal, the Papa Emeritus image still is/used to be/never was a contributing factor to success, it's a fresh breath/passable tribute/stale nostalgia to 70s/80s arena rock, Tobias did/didn't rip off his former bandmates… Suffice to say that for a band leaning closer to pop than metal, or even hard rock, Ghost remains remarkably divisive among metal fans; those with fine-tuned pop sensibilities take the band for what it is and with few exceptions enjoy this act a lot, while getting teased by trve metalheads who spew vitriol on the band (and its fans) despite maintaining that it's not even metal and shouldn't be judged as such. Nothing new on the Western front, eh?

Say what you will, indeed, but for me, there's no denying a sense of pride whenever the band is mentioned; it has achieved great success well beyond the borders of the metal world. Winning the 2016 “Best Metal Performance” Grammy, winning 3 out of 5 nomination in the Swedish equivalent, opening for acts such as Metallica and Foo Fighters, ending up #3 on the American Billboard list of top albums 2018, and receiving the Swedish government’s music export award of 2020, Ghost has undeniably put my sleepy academic hometown Linköping on the global rock map. As for the multiple choices above, my take is: the 70s-proggy Infestissumam was (and remains) the best, it was always hard rock, the anonymity shtick was certainly compelling when I saw the first "pope change" live here in town, the music is more than a tribute but less than original, and as for the juridical debacle, too many rumours and too small a degree of separation makes me say "no comment" (the court dispute resulted in a settlement - moving on).

Whether he always was, and despite preferring to call Ghost a solo project with session musicians, vocalist Tobias Forge (ex-Repugnant, ex-Crashdïet, ex-Onkel Kånkel - the latter fact hilarious to a subset of Swedes for reasons unfit mentioning here) pretty much is Ghost at this point, but he hardly composed the songs on Impera alone; the most noteworthy aspect about this album, in fact, being the actual songwriting credits. We’ll get to that soon enough. Impera is Latin for “to conquer” or “to rule”, and begins in a quite unspectacular fashion. The instrumental intro and first proper song “Kaiserion” are quite forgettable, and makes me wonder why “Spillways” wasn’t the first song. That one’s a proper banger, though, the arpeggiated synths and, to be honest, entire song sounding a lot like Toto or Journey. Okay, so it sounds quite a lot like “Hold The Line”, but I don’t care about originality as long as it’s done well, and “Spillways” is pop hard rock done well.

Next up is the most memorable (thus, since this is basically pop music, the best) song of the album. A title like “Call Me Little Sunshine” might sound like it’d be a half-arsed, corny ballad of some sort (don’t worry, “Darkness At The Heart Of My Love” comes later), but the Blue Öyster Cult main riff, thoroughly catchy chorus (with fun lyrics about, of course, calling out for Satan to never feel alone), and strange little twists towards the end make it highly replayable. Less-but-still-quite-replayable is “Hunter’s Moon”, its slightly too vapid verses being more than enough upended by a nearly wordless chorus encompassing a 9/4-time guitar hook. “Twenties” is introduced by ominous brassworks, and as a whole comes off as something of one of the wackier cuts from Nightwish’s Imaginaerum, which is kind of cool. Next to the closing track, it is also one of the heaviest songs on Impera, which clearly doesn’t focus on metal or even hard rock as much as any Ghost album before it did.

The reason? Co-writers on this album include Swedish pop composer superstars like Salem Al Fakir and Vincent Pontare (Avicii, Madonna, Katy Perry), Peter Svensson (Ariana Grande, Justin Timberlake, Avril Lavigne), Klas Åhlund (Britney Spears, Kylie Minogue), and Joakim Berg (of sadly split-up Swedish indie rock legends Kent). Thus, you should not approach this album as anything other than what it is: a clinically produced, well-but-still-manufactured pop/rock album. Do I win something for this commercial name-dropping? Huh, a boot in my face? Gee, thanks, Satan.

Is it a good album, though? Yeah, partly. Problem is, that for every hit song I mentioned earlier, there’s another song that doesn’t add at all to the quality of the album. I know, I know, this is how pop music works, but I’m here to review the album, not the hit potential of its better songs. As a rock album, it is pretty good, sometimes great, with a few excellent moments spread throughout, but it is just uneven enough not to function fully as a cohesive album. It’s great when it’s good, but most of the time, it’s just… “Eh, good, I guess”. Hail Satan, and whatnot.