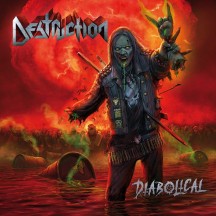 It’s hard to believe Destruction have unleashed 15 albums of their explosive brand of thrash metal thus far in their career; while they have lapsed and disappointed on occasion, the band are usually reliable for solid, top-quality thrash, Diabolical, thankfully, gives fans yet another high-quality album of Teutonic thrash to headbang to, and an album that will likely be a regular feature on CD players and turntables for months to come.

Diabolical marks the first release since the departure of guitarist Sifringer last year, leaving Schmier as the last original member in the line-up. Schmier, thankfully, continues to fly the banner high, with the band retaining much of the same identity and quality of recent years, although Sifringer’s input is a notable absence and one that fans of the band will likely miss.

While it is normally a blow when a band is reduced to one lone original member, Destruction manage the change in personnel well, with the band’s newest member, Furia, making for a perfect foil for Eskic, himself only debuting on 2019’s Born To Perish. Alongside Black and Schmier, who hold down the rhythm section with power and precision, the latter also retaining his trademark vocal style, the band combine to create one hell of a strong and vibrant metal machine that churns out quality song after quality song for much of the album. With tracks such as “No Faith In Humanity” being one of the band’s best in years, it combines a strong riff base with a hypnotic and strong solo that elevates the track beyond much of what the band have produced since the ‘80’s. “Hope Dies Last” sounds more passionate and vital than they have in recent years, grabbing your attention as they grab the wheel and take the album off of autopilot. The early album momentum does stall on “State Of Apathy”, which is somewhat ironic, but “Tormented Soul” pulls you back in with some top-tier groove metal.

While Diabolical sounds clear and pristine, it does at times feel too sterile, resulting in song that sound somewhat characterless as a result of smoothing down the rough edges that had punctuated previous releases like The Antichrist, blunting the band’s abrasive tone that could have enhanced tracks like “The Lonely Wolf”. While this is a regular problem for long-term thrash bands, Destruction’s punkier tendencies had previously separated the band from their peers, meaning the loss of abrasiveness in the album’s sound is a bigger loss than it otherwise would have been.

Aside from the aforementioned “State of Apathy”, there is no outright poor track, though you can’t help but feel a pervasive feeling of sameness at points throughout the album. “Repent Your Sins”, with its generic feel, epitomises this sameness; it’s not bad, but it lacks that spark found elsewhere that elevates other songs beyond being just another album cut. While this has unfortunately been the case with the band’s latter-day discography, on Diabolical, it is the exception to the rule; the majority of the album has more good than bland to it.

While Destruction have been good, if not consistently remarkable, in recent years, Diabolical marks the band’s best work since the turn of the millennium, one that fans of the band and thrash should seek out. While it does not quite stand toe to toe with the band’s classic 80’s work, it is certainly one of the highlights of their career since then; hopefully it signals that Destruction can push themselves that bit further with this new-look line-up.

Written on 04.04.2022 by
omne metallum
Just because I don't care doesn't mean I'm not listening.
More reviews by omne metallum ››