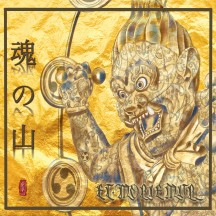 
What is it with Czech bands and Eastern themes?

Let's just say that I was a bit surprise to see a Japanese themed album coming from Et Moriemur, or any European band from that matter who didn't show any signs of weeaboo-ism. I'm not sure what link is there between Czechia and Japan, but Et Moriemur also had Latin themed albums, which makes sense since all of Europe a millennia and a half later still hasn't gotten over the fact that Rome fell. But their previous album, 2018's Epigrammata, at least branched out into Greek instead, which partially explained why our Greek-in-chief loved it so much. However that's only the partial explanation. The rest of it comes down to how effective Et Moriemur are at crafting dramatic atmospheres.

Something about doom just felt Latin, which probably explains why half of extreme metal bands have at least one song is badly translated Latin. So shifting that to Japanese instead is creating a bit of a jarring contrast, or something that would be actually jarring in the wrong hands. Et Moriemur have already had a crowning achievement with their previous album, so the skill is clearly there. And thus, the jarring contrast becomes less of a jarring contrast and more of a well-crafted unique sound. There's plenty of folk instrumentation being used, and while I can't confidently state whether any of it is too cliché or orientalist, the way that they're used never feels too generic for its own good.

Tamashii No Yama benefits a lot from the infusion of Japanese folk instrumentation, as well as a lot of the metal melodies being written around melodies befitting the concept. However, even without said instrumentation, Tamashii No Yama is interesting enough on its own as a piece of very engaging doom metal. Well, death doom, to be more precise, but the "death" part doesn't really get that much sway, at least not as much as the melodic or folk part. The interplay between elements, from choirs to keys to folk instrumentation to guitar solos, is a lot more intricate than just staking some instruments on top of another for a simple blend, so a lot of thought has clearly been put in how all of it gels together.

Being a briefer album than it's predecessor by more than ten minutes of runtime, Tamashii No Yama is more potent in being unique, all the while also being well-crafted and just an all-around fantastic doom metal album. I don't want to place it as being better than Epigrammata, but it's definitely not a rehash.

Written on 12.04.2022 by
RaduP
Doesn't matter that much to me if you agree with me, as long as you checked the album out.
More reviews by RaduP ››