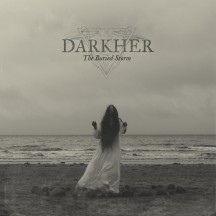 
It even has "Dark" in the band name!

It was 2015. I had been to music festivals before, and it's not like I had only seen rock and metal bands until then, but Dark Bombastic Evening was the first one that felt a bit different. It was the same festival where I've seen Agalloch, Darkspace and Skepticism perform live. However, the first night had no metal acts. It had swamp jazz. And two neofolk acts. And something that you could tell just by the artist name alone that it was gonna be dark. Darkher was pretty bewildering to see live, and I didn't enjoy it as much when I first saw them. Bear in mind that this was before their debut album was even out, and two electric guitars and voice on stage might not be enough to properly create the same dark atmospheres. But something did stuck with me. It was the first time I saw this ethereal dark folk live.

Years have passed since, and Darkher is now a bit more established among this scene, alongside acts like Emma Ruth Rundle, Chelsea Wolfe, Marissa Nadler, King Dude, A.A. Williams and so on. You're probably asking yourself why some of these acts are featured and some are not (unless you're reading this from a future where we've added all of them), and that's a good question. There's varying degrees of heaviness in all of them, but there's usually no album you can unquestionably call metal. But it's a sound that has long been tied to the metal scene, and has intertwined with doom and post and drone metal. You're quite likely to see these at metal festivals, guesting on metal songs, and having metal artists guesting on their songs. Even if they're just a more doom version of what Dead Can Dance were doing.

Darkher's two releases so far have had a clear doom metal influence, and since they had a profile here based on those, you can infer that we considered it significant enough. However, The Buried Storm has the doomgaze vibes turned even higher, as if in a conscious decision to be even more appealing for fans of heavy music. I mean, six years is a long time to wait for a new release, and in the meantime, Realms has only gotten better with age. It's still not a doom metal album per se, but the somber atmosphere feels even more heavy in a dreadful way, it's only ethereal in the sense that the fog might reveal some awful nightmares, the folk is like a melody that might allude to that folk horror story your oma used to tell you. And actually, folk horror is something that keeps popping up in my mind as I listen to this.

The folk aspect of this is a bit hard to pin down. There's more strings this time around, both in terms of acoustic guitars and stuff like violins and cellos, and the atmosphere it creates is a very foggy one. And I swear it's not just the power of the artwork's suggestion. This really feels like a wraith whose curse has not been lifted. A lover cursed by her death. A forest ruled by a leshen. A violet rose from the last time you saw the lover you've driven to madness. A faceless caretaker and two black souls incarnated as pets. A heart of darkness. All of it feels so heavy even without the doom infusions, but the whole atmosphere is so emotionally draining that when the doom explosions hit, their impact is thousandfold. But even those feel more like dirges than actual explosions.

I'm not saying that the album is terrifying, despite my folk horror comparisons. But let's just say, I might chicken out of listening to this if outside and alone in the fog.

Written on 15.04.2022 by
RaduP
Doesn't matter that much to me if you agree with me, as long as you checked the album out.
More reviews by RaduP ››