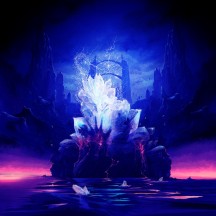 
In Stasis may well be a state in which Monuments wish to find themselves, considering their turbulent past.

Britain’s Monuments are one of the leading bands in the djent scene (even without having heard the band, you could probably guess that from the name alone, which slots in nicely alongside the likes of Intervals and Volumes). However, considering how long they’ve been around, they haven’t got that much to show for it in the way of recorded material; formed in 2006 by Fellsilent’s John Browne (the group that was also the precursor to TesseracT), Monuments only released their debut Gnosis (featuring Matt Rose on vocals) in 2012, before Chris Barretto replaced Rose for two albums (The Amanuensis and Phronesis). These three albums have seen clear ups and downs; Gnosis, a promising debut slightly held back by the vocals, was followed up by The Amanuensis, which I consider to be up there with Periphery II at the peak of the djent mountain, before the lackluster Phronesis ruined the momentum these first two records had generated. Now, it falls upon In Stasis to get Monuments back on track.

One of the reasons for the relative inactivity of Monuments is likely due to personnel issues; In Stasis is the first album to feature Andy Cizek on vocals, who replaced Barretto shortly following the release of Phronesis. Cizek is the band’s sixth lead vocalist, and I imagine the rest of the band must hope that they won’t need another replacement any time soon. Barretto’s departure is not the only change since Phronesis; guitarist Olly Steele has left the group, making In Stasis the band’s first album as a four-piece. The final change sees the return of Mike Malyan, the drummer on The Amanuensis, in place of Daniel Lang. It is all change on In Stasis, and further novelties in the musician line-up on the album include the involvement of Mick Gordon (of Doom soundtrack fame) as a co-producer and arranger, and two guest vocalists; Periphery’s Spencer Sotelo (who also appeared on Gnosis) features on “Arch Essence”, whereas Neema Askari (ex-Fellsilent) makes his first appearance on a Monuments track since his stint in the band at the start of last decade (during which he performed on the We Are The Foundation demo) by contributing to opener “No One Will Teach You”.

Will all of that finally out of the way, how does In Stasis sound? Well, the easiest place to start is with the vocals. Barretto had a pretty unique voice for the djent scene, with a pop sensibility clearly informed by Michael Jackson and a weight to his cleans that defied the angstiness of many metalcore singers. In contrast, Cizek sings in a more conventional tone and style for the genre, plenty of high-register emotionality in line with the likes of Jesse Cash from Erra or Sotelo, such that the interplay between Cizek and Sotelo on “Arch Essence” works very naturally. Losing Barretto does take some of the character away from Monuments that made them stand out from the djent-core crowd; even with the flaws that Phronesis had, his vocals shone in certain signature moments. With Cizek, Monuments do sound less distinctive, but on the flip side, they have obtained someone who is still a very capable vocalist, and with the more ‘emo’ feel to some of the moments on this album, he adds a resonance to them that allows them to shine.

Overall, In Stasis feels like it’s moved a bit away from what the band established themselves as during the 2010s, at least as much as one can while still playing groovy djent-heavy metalcore. Some of the shimmering tone that seeped into moments of The Amanuensis appear in clean-sung sections of the otherwise mid-tempo pulverizing opener “No One Will Teach You”, but the panic chord-heavy opening of “Lavos” is more stereotypically tech-y than the band have typically been. The chorus hook of this song is the first major blow that In Stasis lands; still, the song is slightly disjointed at times in how it flows. In contrast, “Cardinal Red” (credited to feature Gordon) delivers on all fronts, from the emphatic, heavy-hitting riffs and the slick, complex bass parts to the cleaner lulls, all of which come together flawlessly and are capped by a measured but powerful chorus.

As much as I indicated that this album felt at times like a shift away from what the band were doing in the 2010s, “Opiate” is quintessentially a Monuments song, between the clean intro, the vocal hooks and the riffs. By this point of In Stasis, Monuments are firmly into their groove, with “Collapse” featuring some delicious riffs, as well as moments of genuine brutality later on; Cizek gets the chance to show that he’s also got deathcore growls in his arsenal to go with everything else. In its second half, the band give greater priority to the melodic side of their sound, with “False Providence” featuring some nice synth-strings during its climactic moments and “Makeshift Harmony” going all-out in terms of overt hookiness (the ‘why-ay-ay-ay-ay-ay’s can get a tad much by the time the song is over). “The Cimmerian” (the band’s longest song so far) pushes this melodic exploration even further, featuring plenty of softer downtime and an emotional chorus vocal line that’s capped off by a huge evocative climactic outro. The relative contrast between the heavier first half and more melodic second half works out really nicely in the album, mainly because both parts of the band’s sound ultimately click well across the album.

On first listens, I suspected I would come to think of In Stasis in relation to The Amanuensis similarly to how I felt about Erra’s self-titled album when compared to their record Augment, i.e. a solid genre album that lacked some personality compared to the sophomore album that got me into the band. However, I’ve come to really appreciate In Stasis; it’s a huge improvement on Phronesis, and while I don’t think it’s got the uniqueness and front-to-back strength to overthrow The Amanuensis as their best album, it makes for a strong return from this new-look Monuments after a period of turbulence. Now, hopefully they can maintain some line-up stability and build the momentum again.

Written on 18.04.2022 by
musclassia
Hey chief let's talk why not
More reviews by musclassia ››