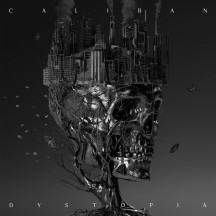 
Blast from the past.

It has been a while since I’ve listened to metalcore, slowly fading from semi-regular rotation and becoming more of a rarity for myself, so it is refreshing to see Caliban release a new album, Dystopia, to give me an excuse to dive back into the genre that, ironically, I largely drifted away from not long after reviewing The Opposite From Within over a year ago.

Caliban may not have hit the heights they looked destined to during metalcore’s heyday, but they have continued to move forward and keep their fanbase happy. Dystopia may not spark a resurgence within metalcore, but it is an enjoyable album that will give fans of the second wave of metalcore a nostalgic (though forward-looking) trip down memory lane.

One of Caliban’s strengths came from their ability to blend European metalcore with the Killswitch Engage school; the band don’t rest on their laurels and have evolved their sound, with Dystopia highlighting their ability to draw from several influences, featuring strong deathcore influences and a big Sempiternal vibe. It is this merging of more modern influences into their (now) old school sound that will likely catch the ear of casual fans. This feeds through on tracks like “Darkness I Became” and “Hibernate”, which are amongst the strongest tracks on the album, alongside other enjoyable tracks like the groovy “The World Breaks Everyone”, the soaring “Phantom Pain” and the full-tilt “Virus”.

Caliban are still a strong force musically, with the material being played to a high level; tracks like “Mother” hit hard thanks to some pummelling drums courtesy of Grün. Perhaps the strongest weapon the band have is with the vocals, with the trio of Dörner, Schmidt and Schaller combining to create hook-laden choruses that elevate much of the material here. The album is well balanced sonically, with each element given the space it needs to breath without stifling any other constituent part, allowing fans to focus on each part separately should they want to.

Much of the album, however, falls into the same pattern; catchy and memorable choruses punctuate otherwise forgettable songs (“Alien” and “Sword”). Even with several special guest appearances, many of the tracks don’t leave a strong impression upon finishing. While there are exceptions to this, there are too few to really aid Dystopia in establishing an identity beyond being a collection of metalcore tracks, or, in the case of “Dragon”, a song that is memorable but not particularly enjoyable.

While it has its strong moments and is an album that shows the band are moving with the times and not repeating the same formula they used twenty years ago, Dystopia lacks enough quality to really impress itself upon listeners, instead playing out and quickly fading from your memory. The band themselves are still a powerful unit musically, able to absorb and reproduce their sounds and influences, but they lack the consistency across an album to bring this to the fore and benefit the whole record.