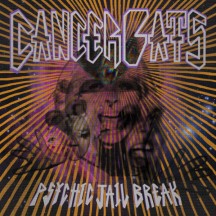 
If you’re such a good psychic, then why did you get put in jail to begin with?

Leading the charge throughout much of the late 00s and early 10s for hardcore, Cancer Bats have seen their fortunes somewhat stall in the mid 10s, being overtaken and overshadowed by a crop of younger bands like Knocked Loose and Code Orange. Though 2018’s The Spark That Moves had the quality to push the band back into the limelight, things didn’t work out that way and the album has become an overlooked gem.

Returning to put things right in 2022 with Psychic Jailbreak, Cancer Bats take aim once again at hitting that sweet spot between metal inflected hardcore and punk with their seventh full length release. While the album itself is unlikely to put the band’s name back at the forefront of the genre, it will likely be the catalyst for the band to do things the hard way and earn their spot as leaders of the pack with their solid live shows.

The loss of Scott Middleton was a blow to both the band and fans, with the band for long not having (he says, knowing it has been four years) picked up the momentum with 2018’s The Spark That Moves after a period of treading water. Now robbed of the riff machine that had laid down the killer hooks on classics like “Hail Destroyer” and “Scared To Death”, Schwarzer takes up double duty in Middleton’s absence and holds down bass and guitar duties. While the album doesn’t feature those instantly memorable riffs, they do feature some decent guitar work on tracks like “Keep On Breathing” which are fun, if not mosh pit inciting. Cormier doesn’t sound like he has aged a day in the nearly twenty years the band has been going, his vocal styling retains its charm and power, such as on “Radiate”.

Psychic Jailbreak is an odd record, while it lacks any track that would instantly have you frothing at the mouth, it has an understated quality that will have you keeping the album on repeat far longer than its prima facie quality would normally have. The slamming “The Hoof”, celebratory “Lonely Bong” and rolling “Shadow Of Mercury” seem like standard hardcore tracks by the band, but perhaps its absence making the heart grow fonder, they are remarkably addictive in their own way. This dichotomy between being unremarkable yet surprisingly strong is what gives Psychic Jailbreak its identity in a way, whereas the band’s prior work had you continually spinning the record to hear the classics, this album will entertain you in its own way sans instant classics.

The album does however hit a bump with “Hammering On”, an admirable and interesting attempt to combine hardcore and doom; but one that excite you much beyond the concept and isn’t that entertaining as a result. “Pressure Mind” isn’t the most inspired work by the band beyond the guitar solo, while it isn’t bad per se, it is a track that could be omitted from the album with little resistance; it does feel like the album is reaching its end at this point, though luckily it picks up for one last hurrah on the following two tracks.

Entering the next phase of their career, Cancer Bats show few signs of letting the departure of Middleton affect the quality of their output, with Psychic Jailbreak being an enjoyable and solid start to build from going forward. While it is unlikely to be the first album by the band that you reach for, it is one that will get more spins and playtime than you might overwise expect; fans will be pleased to have another album of this quality to add to their collections.

Written on 25.04.2022 by
omne metallum
Just because I don't care doesn't mean I'm not listening.
More reviews by omne metallum ››