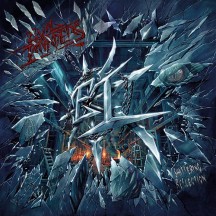 
Were you wondering what Evil Invaders have been doing during the last five years, since Feed Me Violence? I will tell you; they have been rebranding and reinventing themselves. If you remember them as a thrash/speed metal band, you are in for a surprise.

In the promo material, Napalm Records refer to the band as “Belgian metal frontrunners” and call the album a “remarkably melodic and extreme heavy metal masterpiece”. No mention of “thrash” or “speed” and quite rightly so. Shattering Reflection is no masterpiece, but it is a damn good heavy metal album.

In all fairness, the change of style is not that much of a curveball, given that Evil Invaders always had a knack for melodic and classic heavy metal from the days of their debut LP (remember “Stairway To Insanity”?). This is the first time however that - save for “Sledgehammer Justice” which is the only aggressive and speedy thrasher that belongs to a previous album - the band sounds like an amalgam of Judas Priest, Crimson Glory, Metal Church, and W.A.S.P.. And they really pull it off wonderfully.

The first couple of tracks, “Hissing In Crescendo” and “Die For Me”, are uptempo ragers that reveal fast and heavy guitar riffs and great lead playing. With “Forgotten Memories”, on the other hand, they explore darker and doomier musical territories. Listening to the album, and as much as I appreciate the ‘80s heavy metal harmonies that I did not expect to find in such quantities on an Evil Invaders release, what came as a shocker for me was the newfound versatility of Joe’s vocals. The man has progressed so much vocally; he screams and wails like Rob Halford and often comes close to the timbre of Crimson Glory's Midnight (RIP). The way he sings the chorus of the power ballad “In Deepest Black” tops the memorable-o-metre.

So, is there anything not that good about Shattering Reflection? Well, “Realm Of Shadows” is a pointless interlude - just like 99% of interludes - and “Aeon” is an instrumental track that kind of breaks the flow of the album, especially because it comes after the rather indifferent “My World”. The fact that all these songs are located in the second half automatically makes it sound weaker than the first, even though it features two real bangers; “Eternal Darkness” is a marvellous prog power/thrashy specimen and the closer, “The Circle”, is a brilliantly crafted homage to King Diamond/Mercyful Fate.

Shattering Reflection is a bit of a gamble for Evil Invaders because it marks a noticeable change in style, but it is also bound to appeal roughly to the same old-school metal fans that enjoyed their previous works. It is a heavy metal album with a lot of bite; a bite that obviously originates from the band’s thrash and speed metal past. At times, it may feel as if they cannot decide which direction they want to take but I am pretty sure that their talent leaves much to hope for their future and the best of them is yet to come.