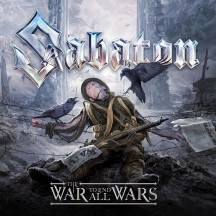 
This album has been out for two months and war still hasn’t ended (actually, it has gotten worse). Nice false advertising, Sabaton.

I started my Metal Storm career by reviewing Coat Of Arms, the last Sabaton album released before I joined the site, and since then I’ve reviewed each of the albums that followed it. The lowest score I’d ever awarded a Sabaton album up to now was 9.3/10, given to The Last Stand, so you can see that I have never had any intention of giving this band an unbiased review. I reserve my right to be incredible (that is in the technical sense of lacking credibility, not the colloquial sense of being very, very good). It must mean something, therefore, if The War To End All Wars has not dazzled me beyond belief like its forefathers; I choose to be optimistic and parse this not as the veil finally being lifted, but as the band encountering unexpected resistance on a routine mission. Whatever the cause, however long the expected duration of this slump, whether it’s me or the band that has the problem, the end result is the same: The War To End All Wars feels about as vital and effective as the Treaty of Versailles.

The funny thing is that there is virtually no criticism of this album that cannot equally be levied against basically any Sabaton album, at least conceptually – it’s not as though they haven’t made a career out of rephrasing the same slogans and repurposing the same melodies since 2005. Yet after a million marches crossing the same paths, the fields of no man’s land must finally sink into endless muck, and even unquestioning devotees such as myself can no longer overlook how the same problems go forever unaddressed.

With respect to the fact that neither Joakim Brodén nor Pär Sundström is writing in their native language (if I’m not mistaken, English is Joakim’s third, after Swedish and Czech), the textual element of Sabaton has always been, and likely will always be, the nail in the boot that hobbles them; especially on tracks like “The Unkillable Soldier” and “Hellfighters,” the constant recapitulation of themes in the same sound bites escalates to new levels of distraction. These are the most mundane and hackneyed choruses we have ever heard from a band whose originality in verse has never garnered praise, and the vocabulary has been stretched further than the Chasseurs Ardennais during the invasion of Belgium. There is no shame in hiring a lyricist, and that is a genuine suggestion; I’ll even do it myself, given half a chance. I just need to hear a couple of new catchphrases before the monumental figures and deeds chronicled by this band lose their luster under the dead weight of dry words.

Naturally, the songwriting production line functions with a similar mechanism, and here, too, we see why General Patton once opined that “fixed fortifications are monuments to man’s stupidity.” “Race To The Sea” sounds like a charmless cover of “Bismarck,” and I’m still looking askance at “Hellfighters” and “The Unkillable Soldier” as I wait to become enamored of them after a dozen repeat plays; all the tightened screws of The Great War are becoming loosened and stripped as an uncomfortable malaise settles in. Now, these limitations in writing conventions are typically overcome with adequate amounts of flair and flame. To me, it has always been evolving production values that served to distinguish each album from the last and demonstrate measurable improvement over time (a key component of my enjoyment in many cases), but The War To End All Wars fights a battle on two fronts in this department. On the stagnating Western Front, this album follows the blueprint of The Great War to such a careful degree that it sounds much like an identical counterpart, utilizing similar applications of vocal harmonies, layered instruments, and pop-metal engineering. It’s the first time since the Primo Victoria/Attero Dominatus duology that I feel that there is no significant distinction between the aesthetic presentations of two successive releases. On the resource-draining Eastern Front, The War To End All Wars actually sounds like a worse version of The Great War, not quite an equal partner, beset by sickly guitars and infirm synths that hold little of the bombinating bombast I so love to hear; the crispness and complexity of production that made The Great War shine here wilt and crumble. There is nothing as explosive as “The Red Baron” or as elegant as “Fields Of Verdun” or as destructive as “The Great War,” and although I’ve avoided the obvious pun of The Bore To End All Bores, I find the spirit lacking as much as the flesh; the ol’ Sabatonkampfwagen goes through so many retreads that the tracks wear out completely by the album’s end, and whether this hunk of metal can cruise on its wheels instead like the BT-42 or will just skid into the trenches with the other disused husks depends wholly on the indulgence of the listener.

Sabaton still know how to make their resources and experience work for them; “Dreadnought” and “Soldier Of Heaven” have a killer stomp that’s all prime power metal, “Lady Of The Dark” has an unfamiliar groove that shows there’s still plenty of grease on the Sabatank treads, and “Christmas Truce” is a too-rare and very grand production at over five minutes (geez, that’s like the life cycle of a red dwarf compared to your average Sabaton track. I’m still going to be humming most of these tracks as much as any other favorite, and I hope I one day get the chance to witness them all live. There is one real touch of brilliance present as well: the opening track, “Sarajevo,” marches in with a tense and fearful chorus that captures the apprehension felt across the world during that first month after Archduke Ferdinand’s assassination. The final track, “Versailles,” after a bout of cheeriness and relief, chronicling the short-lived optimism of the aftermath, fades into the same chorus, casting doubt on the promises made by its naïve subject and signifying the cyclical nature of warfare. “Can a war really end all wars?” it asks as it dies down, echoing presumably forever, and this, for all my criticism of this album’s intellectual merit, is a Big Question of the sort that everyone must, at some point, consider deeply. This reincorporation of the theme is an effective device that I wish the album had been consistently strong enough to support.

I guess I shouldn’t lie to you all: there is a nonzero chance that by the time the next Metal Storm Awards roll around I’ll have listened to this another 70 times and I’ll be calling it my album of the year. That is just how it is. For now, though, I thought it was important to capture my impressions of the new Sabaton album in the period before I completely lose all sense of proportion – which does seem to be taking longer than usual to arrive. Though this album adds another couple of fan favorites to the can(n)on and I will likely play through it as much as every other album, variations in quality notwithstanding, The War To End All Wars feels too much like a collection of B-sides to The Great War, not only lacking its own identity as an album but also failing to escape Sabaton’s least effective writing handicaps. I’m still in the midst of infinite replays of Beast In Black’s Dark Connection, which scratches this itch far better than The War To End All Wars ever could, and knowing that there is such strong competition disinclines me from trying too hard to save this album’s reputation; I know that Sabaton is capable of experimentation and evolution, so I do hope that for their next offensive they will take a lesson from history’s great commanders and start strategizing outside the box.