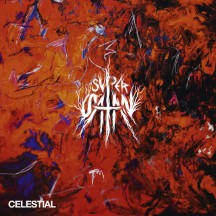 
Super Satan don’t sound like you would imagine a band named ‘Super Satan’ would; they’re a lot more interesting than that.

According to an interview with the project leader, Julian Gruber, the band name arose during Super Satan’s infancy as a black/grind project, and has been maintained for marketing purposes even as their sound has evolved. That explanation makes sense; ‘Super Satan’ is the kind of goofy name a band trying to be as extreme as possible would opt for. However, it’s their second album’s name, Celestial, that gets closer to representing what is presented on this record; there is a black metal base to Super Satan, albeit very melodic, but things are very ethereal and explorative on this record.

Super Satan is seemingly more than anything Gruber’s project (although Sebastian Unić is effectively a permanent drummer since he’s performed on all their studio work and they don’t play live), but several other musicians are also contributing, with two members of Revanchist covering vocals and bass this time around. However, the individual that stands out most when listening to Celestial, and the one that drew me in when I gave the record a brief once-over during my weekly round-ups, was Fini ‘She Was Deathless’ on vocals, her gentle, high-pitched cleans serving as a stark contrast to Kevin Nocullak’s harsh vocals.

Angelic female singing combined with blackened metal is not unheard of; Myrkur garnered a lot of attention by placing such vocals within Ulver-inspired songs on her early material. However, records such as M were very much black-lite; in contrast, despite a clear melodic slant and flirtations with post-black/blackgaze territories, Super Satan do incorporate genuine black metal intensity on Celestial. The guitars are loud and sharp-edged, the drums have no hesitation to blast or to rampage, and Nocullak’s range covers both growls and shrieks. Against this backdrop, Fini’s singing, which is frequently self-harmonized through intricate layering and can sound anything from almost operatic to something more in the vein of Anette Olzon, really stands out. Furthermore, not only does it manage to initially capture one’s attention, but it really effectively complements the surrounding instrumentation to become a strength of the album rather than a gimmick. Does it always work? No, I’d say it doesn’t; there’s at least a few moments where her vocal melodies don’t click with the instrumentals (black metal often doesn’t require one to need vocal melodies, so it is understandable), and there’s instances where her overly gentle tone and the lack of full-blooded force sells sections short. However, the parts of the album that are elevated by Fini drastically outweigh these minor niggles.

While these vocals are the main thing that differentiates Celestial from so much blackened metal, it’s by no means the only thing Super Satan have going for them on this album. “The Forest Has Eyes” and “Oracle Of Sand” make an impression through her dramatic chorus on the former and Ayreon-esque feature on the latter, but within two songs Super Satan already demonstrate that they can range from full-speed intensity on the former to mid-tempo alt-influenced stomping on the latter (not to mention the subtle trance synths that sneak into the mix). Additionally, while still contemplating vocals, Nocullak’s roars (which left me thinking of Becoming The Archetype on more than one occasion) go really nicely with these songs, the more metalcore screams working very effectively on the tracks that stray further into such territory.

It shouldn’t be surprising given the bold clash of sounds Super Satan bring together early on, but Celestial remains quite ambitious throughout; “Manta Rays” shows a more progressive angle with its mellow, dreamy midsection, which is contrasted with a very Myrkur-esque introduction. “Celestial” clashes ballistic double bass rolls and blasts with blackgaze-influenced moments and some really evocative melodies without sounding forced, while “The Crown” extends those flirtations with blackgaze before going in a whole other direction with an elaborate keyboard-driven bridge. The ideas don’t really let up across Celestial, and although not everything works, more than enough does for this boldness to pay off in spades.

It would have been very easy for Celestial to stand out for its novelty rather than its quality, but Gruber and his collaborators have brought everything together here in a way that I feel clicks very nicely. It does still sound like a prototype at times, but it’s very close to the finished article, and considering how much success Myrkur found, I feel like there must be a market for Super Satan’s sound out there when they do iron out the creases.

Written on 28.04.2022 by
musclassia
Hey chief let's talk why not
More reviews by musclassia ››