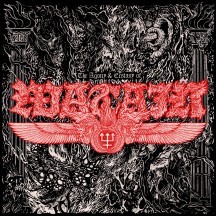 
Watain are back for real, bringing more Lawless Darkness for us all. Let the devils and their extras take you already. The coffee tastes like blood at the 11th circle of Hell - construction expected to finish within the next millennium. We could use the space.

Let me tell you the story of Watain. Based in the religious capital of Uppsala, Sweden, they've made a huge mark with their raw, rocking, melodic style carrying on the legacy of Dissection in both tone and spirit, as well as their theatrical, provocative live performances (they have since been banned from shooting cannons of blood at the audience, and resorted to sprinkling it from a cup, which I can attest smells just as foul). After an unlikely win of the Swedish equivalent to a Grammy for Best Hard Rock Album Of The Year in 2010, Watain upset a lot of people by taking the experimental and/or/if/else sell-out route and incorporating (gasp!) clean vocals on their follow-up The Wild Hunt, then severely overcompensated with the half-arsed Trident Wolf Eclipse which was way too short, monotone, and uninspired. Having previous to the aforementioned two albums cemented themselves as quite possibly the most popular black metal band from Sweden, and definitely one of my personal favourites, suffice to say the announcement of a new release filled me with equal amounts of excitement and trepidation.

Better yet, listen to The Agony & Ecstasy Of Watain and let them tell you their story themselves. I shouldn't have worried. Time will tell, but this latest effort could very well be their finest work to date. "Sacrilege," I can already hear you scream, "no black metal album could rival Casus Luciferi/Sworn To The Dark/Lawless Darkness!" See? Every black metal fan worth their salt has a favourite Watain album. If you don’t, well, don’t speak to me until you have one, unless you want me to help you find one. As of now, their latest one is mine. Everything I love about this band's earlier efforts is back with a blast, and then some. I mean "blast" quite literally; the album starts out with a clipping explosion of Wagnerian cannon fire, after which follows an impenetrable pandemonium of riffs and almost capped off by sublime, slightly Nordic folk-ish neoclassical guitar licks.

First single "The Howling" is a melo-thrash-black assault, with a chorus as shriekaraokatchy™ as headbangaballistic™, and the second single "Serimosa" a memorable, mid-paced black metal anthem about some goddess bringing the everlasting night, as is usually the case with Erik Danielsson's lyrics. Yet however cheesy they might come off as, keep in mind this is a band self-professedly authentically devout in their theistic Satanism, and part of the Misanthropic Luciferian Order founded by Jon Nödtveidt (Dissection); they are as Satanic as your nutty grandma is Christian, and you know, that's pretty cool, after all, no matter what your opinions on religion might be.

“Beneath! Beyond! Behind! Below!” BOOM!

Alright, so the first three tracks already each brought something reminiscent of the trio of albums people typically think of regarding this band, so where to go next? Something slightly unexpected, maybe? Yes, there's a somewhat progressive aspect to "Black Cunt", in that it doesn't follow any predictable structure, but rather hopping from one movement to the next in a disconnected fashion that after many listens still doesn't connect with me, and makes it the only notable pitfall of the album.

Some Black Waltz & Co. later, a short interlude that I assume is played on a grand piano (it sounds absolutely majestic, regardless) leads into the 8-minute, raw-into-melodic epic "Before The Cataclysm"; a track title that could be interpreted quite literally, as the following "We Remain" is bound to ruffle some feathers. Not quite as unorthodox as "We Rode On", this slow, anthemic dirge's main selling point is still an eerie synth hook and gothic female vocals. Well, I love it. I love it very much…

…I love it nearly as much as I love the closing track "Septentrion" (an old name for the North and the Big Dipper constellation, whence certainly some ancient cosmic horror is bound to approach). It's a beautifully epic song, with passages of a guitar melody so beautifully melancholic I swear the wind is blowing extra hard into my extra dry eyes as I listen extra many times to this extra fantastic tune. This is not second wave black metal, nor is it particularly experimental; no, this is the apex of anthemic, melodic black metal; slow-varied, repeating tremolo patterns composed perfectly in a style that few, if any, but Watain, at their best, could create. The sheer sense of conviction and, I guess, spirituality of it all, cannot be denied.

Bottom line, Watain are back at doing what they do best, and they do it as well as, or even better than, they ever did before. I love this album, and so should you. Hail Satan, Azerate, all the others, and all that. Listen to Watain, you god-damn non-anti-non-heathens. “Fuck the world”, as they proclaim in "Serimosa", but hey, at least listen to The Agony & Ecstasy Of Watain before you go fuck yourself…