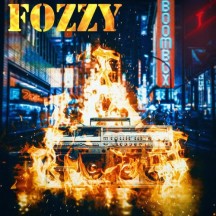 
Are Bluetooth speakers the modern boomboxes?

Oft derided as the part-time gig of one Chris Jericho, Fozzy have long been plugging away behind the shadow of their front man, producing several albums of their own to warrant viewing them in their own light. Their eighth album, Boombox, comes off the back of the big success of “Judas”, one of the catchiest modern metal songs you will likely have heard in recent years. Unfortunately for the band and fans, Boombox doesn’t build on the success of their prior hit, but merely produce the latest cache of tracks for fans to listen to.

Fozzy are the type of band you listen to in the background, something that will catch your ear with minimal effort and give you something to enjoy while focusing your attention elsewhere, providing straight-to-the-point riffs and sing-along moments while you go about your day. This isn’t a critique of the band; in fact, some of the biggest bands ever fit this mould, yet this is often used as a stick to beat Fozzy with.

While much of the album is cookie cutter, this isn’t a bad thing when things are, well, fun. “Sane” and “I Still Burn” aren’t going to change the world, but they’re enjoyable listens and will have you singing along to the choruses and nodding along to the riffs. Depending on where you set your bar for new music will likely determine how much you get out of Boombox. If you want something to bop along to and a chorus that will make you want to sing along to, then Fozzy have got you covered; if you are looking for something to challenge you and bend your mind in unexpected ways then no, look elsewhere.

The album’s most memorable moments are the ones that grab your attention and never let go, with “Purifier” being an upbeat and driving number that is nigh-on guaranteed to get a reaction out of you, while the other track... welllllll, if you don’t believe me when I say it will grab your attention, put on “Relax” and tell me it didn’t evoke some kind of response from you. I won’t spoil the reason why, but if you are able to sit straight-faced through it, then I would recommend checking your pulse.

The problem Boombox has is the same as the rest of the band’s back catalogue, namely consistency. Aside from a few songs that elicit a strong response, there are too many songs that do little more than keep your mind occupied while they play out but leave no lasting impression once they come to a close. “Nowhere To Run” and “My Great Wall” pretty much epitomise this issue, two songs that aren’t bad, but they aren’t much better than passable; “Omen” comes close to breaking this mould, only to be let down by its chorus.
With that said, there are moments where the band just drop the ball completely, “Ugly On The Inside” sounds like a The Pretty Reckless B-side, while “What Hell Is Like To” also fits this description, but with the added benefit of having rapid-fire vocal parts that will give you Stuck Mojo flashbacks. On top of that, “Army Of One” is probably a contender for the most boring ballad of the year.

Boombox is well produced, if lacking character; it sounds big and powerful when coming out of the speakers, but it is smoothed out to the point where it loses a lot in terms of identity and oomph. The band beyond Jericho (who is a passable vocalist) are decent, they perform well if not imposing much in the way of identity for themselves.

Overall, Boombox is another Fozzy album, it has its moments (and I’m sure you will remember one of them for a looooong time) and is for the most part is a fun album, if not much more than that.

Written on 08.05.2022 by
omne metallum
Just because I don't care doesn't mean I'm not listening.
More reviews by omne metallum ››